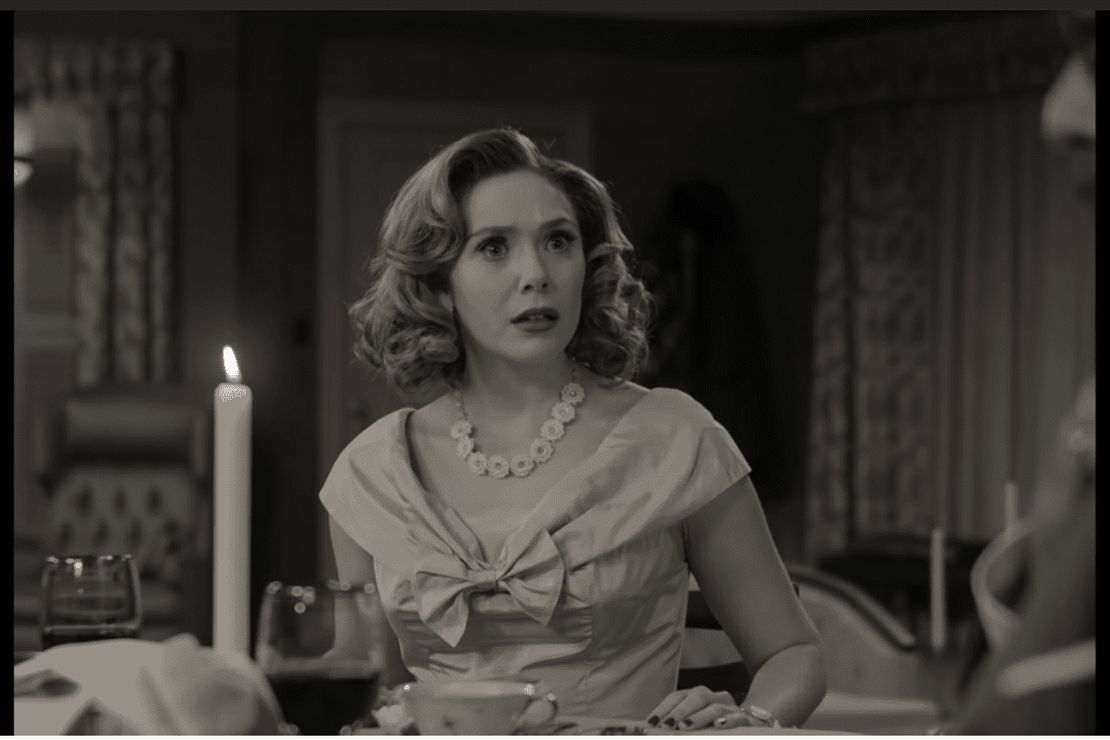 Traveling Slowly Down the Stream With WandaVision

Let me begin by proclaiming my almost never ending fandom for the Marvel Cinematic Universe (MCU). It all started when I was a kid, of course. I read a lot of Iron Man and Hulk comic books as a lad. I have thoroughly enjoyed most of the MCU offerings over the years although I should be honest here and say that I didn’t much care for either Avengers: Infinity War or Avengers: Endgame. I disliked each for different reasons, and those would be enough for a separate column.

Still, the entire MCU oeuvre had built up enough cachet for me to indulge some creative forays, which is what WandaVision promised to be.

Before I get into what bugged me about it I just want to say that this is about nothing more than an initial reaction of mine. I apologize to those of you who have been spoiled by Bryan’s writing about television. He can take a ninety second scene from The Mandalorian and write a thousand words about how it obviously hearkened back to Plato’s Academy at Athens while both embracing and critiquing postmodernism and ultimately pondering whether Hugh Hefner exists in all timelines and universes and may once have visited Tatooine.

I ain’t that fancy.

WandaVision premiered this past weekend on Disney+ with a two episode release. I got around to watching it on Sunday night and bailed after fifteen minutes. I then tweeted that I’d bailed and several people immediately said I should be patient enough to watch both episodes. I have the television on all night when I’m working on the Morning Briefing so I put the suggestions on the back burner, re-watched Batman Begins (I’m a big DC fan too) and thought about it. Since the WandaVision episodes are so short, I decided to commit.

They bored me to tears.

The episodes cleverly paid homage to a more innocent time in television: the first one to The Dick Van Dyke Show and the second to Bewitched. The trailer I posted below shows that there could be some interesting departures in the offing. The show is just not getting there quickly enough for me, which brings me to my pet peeve.

I watch a lot of streaming network original programming now. I subscribe to Neflix, Amazon, Disney+, BritBox all the time and to HBO, Showtime, and Starz whenever they have new seasons of original shows that I like.

I began noticing a trend last year that I didn’t like at all: The newer original series were all starting slowly, often doing a two or three episode build up before anything interesting happened. I can’t remember how many series I began watching only to stop halfway through the first episode because I wanted to drive a nail into my head just so I could feel something again. I would then mention on social media that I’d quit watching and be met with a chorus of “Give it a few episodes.’

Back in the network television day, a show had to hit a home run in the pilot episode or it might not even get a second airing. Yeah, that meant that there was a lot of expository dialog scrambling to get things set up, but the creators of the show were very much intent on entertaining the audience right out of the gate.

The streaming networks are generally committing to ten or thirteen episodes  which means that the creators can be more self indulgent, which is not always a good thing. OK, it’s rarely a good thing. Once there is an audience the primary goal should be to immediately entertain them, not get around to it when those providing the entertainment are finally in the mood.

Here’s an example. I started going on the road and doing stand-up professionally in the late 1980’s. In over three decades of professional stand-up I’ve had four opening lines for my act.

I don’t use them interchangeably either. Each one represented a certain point in my creative life. The most recent one has been around for a while and I have no intention of swapping it out any time soon. My only goal is to make sure I hit the stage with a laugh. Do I get a little bored using the same line over and over? Yeah. Does it matter? No, because I’m not there to entertain myself.

What bugs me most about this multi-episode sleep walk that seems to have become de rigueur now is that writers and directors of streaming originals seem to be doing it simply because they can. It’s lazy.There is absolutely no reason that you can’t wow me in the first fifteen minutes. Everything doesn’t have to be a Clint Eastwood-directed movie. (Not that the first seventeen hours of Unforgiven weren’t filled with beautiful cinematography, I just want to get to “He shoulda armed himself,” as quickly as possible.)

There is also the fact that the rate at which we’re getting new original content (or second and third seasons) has picked up greatly in the past couple of years. There’s more to choose from every week. There’s less incentive to be patient with a slow starter unless — as I fear may happen — they all become slow starters.

One way around this would be to borrow a page from the network television playbook: do longer pilot episodes. Get all of the creator’s self-indulgent tedium out of the way in a ninety minute kickoff.

Anyway, that’s my peeve and I’m sticking to it. Here is the WandaVision trailer. For those of you who continue to watch the show, please let me know if it ever gets interesting.

Kruiser on Parler
Kruiser on MeWe
Kruiser on Twitter
Kruiser on Facebook
PJ Media Senior Columnist and Associate Editor Stephen Kruiser is the author of “Don’t Let the Hippies Shower” and “Straight Outta Feelings: Political Zen in the Age of Outrage,” both of which address serious subjects in a humorous way. Monday through Friday he edits PJ Media’s “Morning Briefing.” His columns appear twice a week.