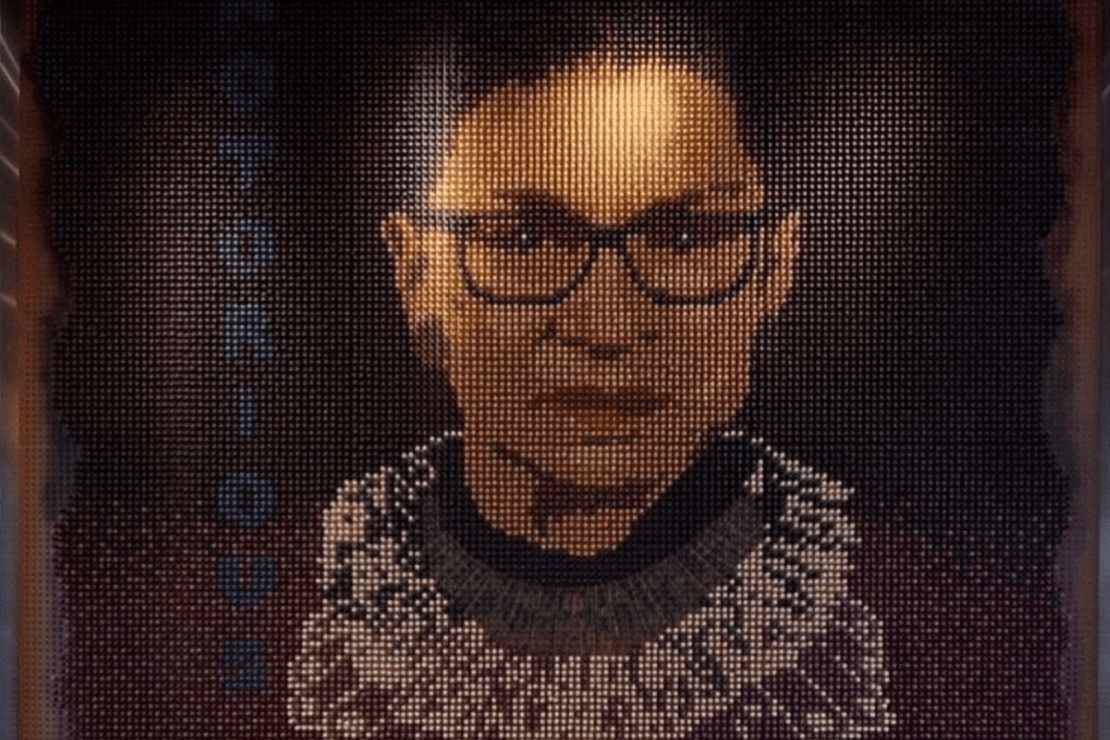 A new hotel on the outskirts of Washington, D.C., apparently hopes to somehow turn a profit by catering to embittered third-wave feminists and the self-hating men who enable their fits and endure their incessant complaining.

According to a press release, Hotel Zena, which opened on October 8, offers “a bold new cultural hub celebrating the accomplishments of women and recognizing their enduring struggle for gender equality.”

The “thoughtfully designed and curated” hotel exists “to send a message of female empowerment.” The artwork in the building works to “create a message of struggle, empowerment and hope,” so says the hotel.

The pièce de résistance of the upscale hotel is a massive pointillist portrait of late Supreme Court Justice Ruth Bader Ginsburg—made of 20,000 “organic, hand-painted tampons” in a “tribute to her strength, poise and unrelenting commitment to gender equality”—because nothing says “poise” like a bunch of wadded up tampons. (Are you even a woman if you don’t aspire to have your visage memorialized with feminine hygiene products?)

According to the press release, the tampons were “repurposed” to create the portrait, which, I hope, doesn’t mean what I think it means. (ICYMI, third-wave feminists have a bizarre obsession with menstruation, to the point that they’ll intentionally bleed through their clothes in order to demonstrate how empowered they are or something.)

Here’s Notorious RBG in all her feminine hygiene glory:

Jon Bortz, CEO of Pebblebrook Hotel Trust said, “We created a safe gathering space that celebrates diversity, respects different points of view, and opens the floor to topics worthy of meaningful conversation.” Bortz added that the hotel pushes boundaries and might make some people uncomfortable. “We’re okay with that,” he said. (You can bet your last tampon that the nod to respecting different points of view only includes those views with which the man-hating female empowerment crowd approves.

In addition to the RBG tampon art, hotel guests can expect to be “Immersed in over 60 pieces of gallery-quality art” that revolve around “the courage of some of the world’s most notable people and their fight for inclusivity and change.” Artists include “feminists of both genders with powerful stories to share,” whatever that means.

The hotel’s interior also includes a “playful” sequined gown display “layered with 8,000 hand-pinned protest buttons supporting the fight for gender equality and women’s rights” and a portrait gallery featuring “stories of female warriors.” External murals, designed to “create intrigue,” are composed of a pair of “fierce yet curious warrior sentinel women, here to protect Mother Earth/Pachamama and set amid lush natural elements and botanicals.” This place sounds super-fun, doesn’t it?

Continuing the pagan-hedonist theme, Hedy’s Rooftop is slated to open in 2021, featuring a “Dancing Druids” mural “celebrating the rights [is that some sort of double entendre or a typo] of fertility and spring” along with a six-foot-tall, internally lit Venus who “will spread her soft glow in the night.”

Buried deep within the press release is this unwoke nugget: “Executive Chef David Sears embraces the modern wellness movement through a carefully crafted menu of approachable, locally-sourced shared plates and entrees, and a Drinks Menu that embraces bold flavors in daringly delectable mocktails and cocktails.” David, you say? Oh yes, and we are off to the races on Twitter:

Given its professed commitment to gender equity, Hotel Zena missed an opportunity to place a woman in a public-facing leadership position. https://t.co/LJX66EjaGK

Meet the Hotel That’s All About ‘Female Empowerment’ — and Its Male Executive Chef: It’s unclear if anyone at Hotel Zena had a conversation about putting a woman in charge of the kitchen at the hotel’s Figleaf restaurant https://t.co/CwlsWpE29Q https://t.co/DOqqI2YrdJ pic.twitter.com/q4IWzuvSDO

This is so ridiculous and embarrassing all around, including their idea to put a man “in the kitchen” as if it’s a “ha!” when 80% of head chefs are male and feminists in the culinary world are pushing for more female head chefs. https://t.co/DMVdFw6O5L

7/9 people on the board of the company that owns Hotel Zena are male. The hotel has an illegal resort fee. This hotel does not care about female empowerment at all. Never stay here. https://t.co/DmSVJlTyxQ

So much for diversity.

According to Eater D.C., “A representative for Hotel Zena says Figleaf opened with a limited menu and staff because of operating restrictions and business challenges in place during the COVID-19 crisis. They say how Hotel Zena looks upon opening in a pandemic does not reflect how it will look with a full staff in 2021.”

“As [Hotel Zena] grows, the team will too with a new chef de cuisine, restaurant manager and more team members,” the hotel told Eater.

In other words, barring any last-minute hail-Mary genital-mutilation surgeries, Mr. Sears will be out on his butt faster than you can say, “serve me up a Gendermint cocktail.”

We recommend taking a hard pass on this establishment—unless you like your meals served with a side of outrage.