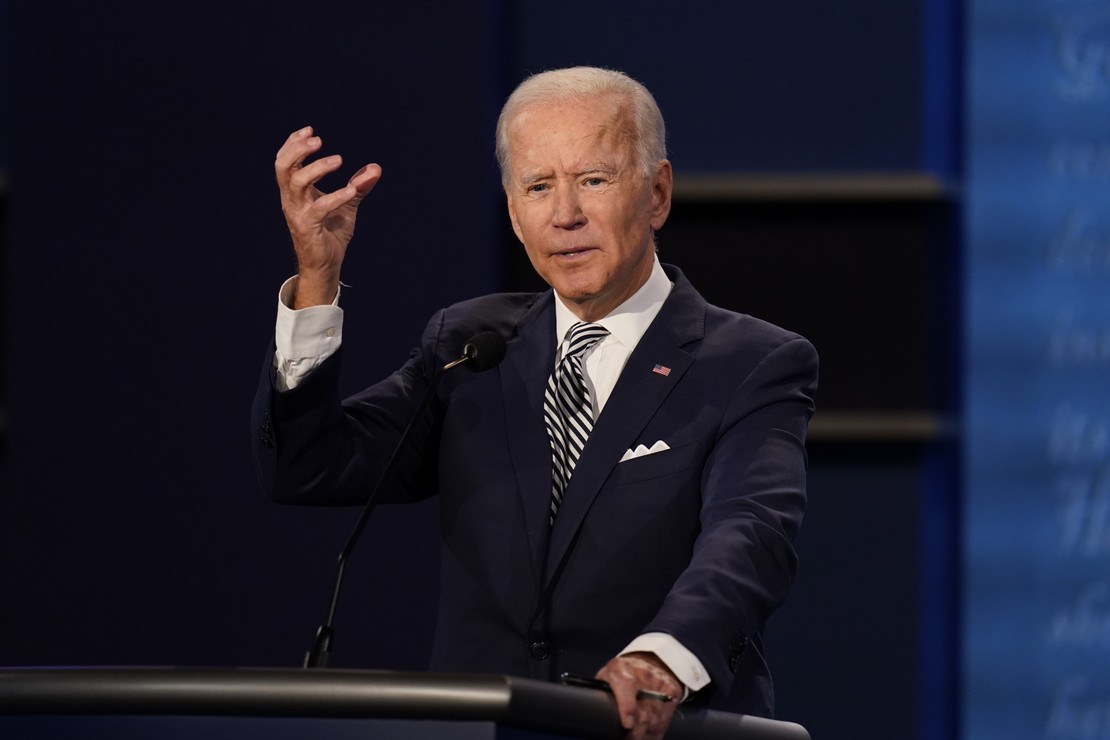 While Trump faced questions about white supremacy and Q-anon, Biden did not get one question about his son Hunter’s notorious business deals in Ukraine and China — even after social media censorship drew attention to a New York Post story that claimed to unearth a “smoking gun” that contradicted Joe Biden’s insistence that he never talked with Hunter about business.

Even so, Biden managed to come across as shifty. Here are 7 key take-aways from his performance.

When a Democratic voter asked Biden what he would say to “LGBTQ Americans and others worried about erosions of their rights,” Biden insisted that LGBT people have “great reason to be concerned” about Amy Coney Barrett, President Donald Trump’s Supreme Court nominee.

Biden admitted that he didn’t listen to Barrett’s confirmation hearings, but he did read “the recaps.”

“My reading online what the judge said was she didn’t answer very many questions at all and I don’t even think she’s really laid out much of a judicial philosophy,” Biden said. He specifically faulted Barrett for not addressing “unenumerated rights” — presumably a reference to the “rights” to abortion and same-sex marriage which activist Supreme Court justices invented from whole cloth.

This argument is extremely unfair to Barrett, who followed the Ginsburg rule — a rule Biden himself once supported. Barrett said she could not say exactly how she would rule in particular cases. As Ginsburg said, “My own views and what I would do if I were sitting in the legislature are not relevant to the job for which you are considering me, which is the job of a judge.”

At Ginsburg’s hearing, Biden said, “You not only have a right to choose what you will answer and not answer but, in my view, you should not answer a question of what your view will be.”

As for Barrett’s judicial philosophy, the judge has made it clear that she is an originalist, she will interpret the Constitution based on its original public meaning. This means she will likely reconsider so-called rights that are not in the Constitution, such as the “rights” to abortion and same-sex marriage.

This does not mean she would make abortion or same-sex marriage illegal with the stroke of a pen, however. If a particular case involving those issues emerges, Barrett would resolve the case by reversing Roe v. Wade (1973) or Obergefell v. Hodges (2015), likely allowing the states to make their own laws on these contentious issues. This would allow the people to make law on these issues, rather than having the Supreme Court declare new law by fiat as it did in Roe and Obergefell.

Biden did not just attack Barrett, however. He also refused to answer whether or not he supports packing the Supreme Court. While he repeated that he has “not been a fan of Court-packing,” he said, “It depends on how this turns out.” He also repeated the tired line that if he gave a definitive position, that would become the story and a distraction from the election.

#BREAKING: Even though he reiterates he’s still “not a fan” of court-packing, Biden opens the door to the idea of “other alternatives” and policies regarding the future of the Supreme Court.

In other words, he’s moving toward court-packing, folks. Get ready. #BidenTownHall pic.twitter.com/HSGI0noJd5

Perhaps most notably, he gave a weasely argument that seems intended to justify the heinous act of packing the Supreme Court.

Biden argued that it is not “appropriate” for Trump to have nominated Barrett after some Americans had already voted early.

Stephanopoulos noted that the president serves for four years, not until the beginning of an election.

Even so, Biden argued, “once an election begins, by implication, it is inconsistent with the Constitutional principles in my view… I believe it is inconsistent, when millions of people have already voted, to put someone on the Court. I think it should have been held until this election is over.”

It seems Biden is working overtime to craft a rationale for packing the Court.

Asked what he would say to LGBTQ Americans and others who are worried “about erosions of their rights,” former VP Biden says “I think there’s great reason to be concerned for the LGBTQ community, something I fought very hard for.” https://t.co/JEyTOkB6qk #BidenTownHall pic.twitter.com/BnZ8XSOJSA

?? Editor’s Note: It’s time for conservatives to stand together and fight big-tech censorship. Join PJ Media VIP and use the promo code CENSORSHIP for 25% off your VIP membership. ??

Biden referred to the Green New Deal, Rep. Alexandria Ocasio-Cortez’s (D-N.Y.) climate boondoggle, as “the New Green Deal.” He also attempted to distance himself from it.

Biden on @ABC tonight on the Green New Deal

“My deal is a crucial framework but not the New Green Deal.”

Biden attacked Senate Republicans for focusing on the Supreme Court confirmation rather than passing a COVID-19 stimulus bill, even though House Speaker Nancy Pelosi (D-Calif.) is responsible for holding up the stimulus.

Yet, over on NBC News, President Trump urged Pelosi to move on a stimulus bill.

President @realDonaldTrump tells Nancy Pelosi to get moving on a stimulus bill he can sign: She couldn’t care less about the American worker#TrumpTownHall pic.twitter.com/va9a35ElSw

Even CNN’s Wolf Blitzer pressed Pelosi on her decision to block relief.

? WATCH → Nancy Pelosi has no answer when CNN actually presses her for once on why she’s blocking a deal to deliver aid to workers and families in need.

You know Dems are in trouble when they can’t even get CNN on their side. pic.twitter.com/0GTcWdE0PT

5. Unless you’re a dictator…

At one point, Biden insisted that he could not raise taxes unless he got the votes in Congress. Yet when it comes to LGBT issues, he promised he would “flat-out just change the law.”

When Stephanopoulos asked him about how quickly his tax increases would go into effect, Biden insisted that he would have to get any tax increases through Congress.

Later on, a mother of a boy who identifies as a girl asked Biden how he would reverse President Trump’s “dangerous and discriminatory agenda.”

“I will flat-out just change the law, eliminate those executive orders, number one,” Biden said.

Yet when it comes to the law, Trump was not the one whose executive orders twisted the laws Congress passed. President Barack Obama issued executive orders in order to redefine biological sex to mean transgender identity in federal law, in clear contrast to the plain meaning of statutes. President Trump reversed this revision, and Biden wants to undo Trump’s restoration of the original meaning of the laws.

In other words, Biden wants to do the very thing that he said would make him a dictator — just not with tax policy, but on LGBT issues.

Asked by a mother of a transgender child about what he will do to protect LGBTQ rights, former VP Biden says: “I will flat out just change the law.” https://t.co/JEyTOkB6qk #BidenTownHall pic.twitter.com/fxg7AhKwHG

In one of the most memorable moments of the ABC News town hall, a young black man who identified himself as a progressive Democrat asked the former vice president, “Besides ‘You ain’t black,’ what do you have to say to young black voters who see voting for you as further participation in a system that continually fails to protect them?”

Biden meandered in his answer. He suggested that early education would help black children get ahead, saying that “every 3- and 4- and 5-year-old will go to school, not daycare, school.” He later mentioned funding for Historically Black Colleges and Universities (HBCUs), which President Trump achieved.

“Besides ‘you ain’t black,’ what do you have to say to young black voters who see voting for you as further participation in a system that fails to protect them?” pic.twitter.com/acT4UWxUwe

7. ANOTHER break for Biden?

As the town hall continued, ABC News cut for commercial breaks more frequently. As my colleague Jeff Reynolds pointed out, after one break in the second hour, Biden got 12 minutes to answer two questions, and then ABC News cut to another break after only 6 minutes.

Biden got the kid gloves in his town hall, but even then the Democratic nominee still needed more frequent breaks after about an hour. Biden has also been calling lids on the day — ending all public appearances — after the early morning, even in the months leading up to the election.

Do Americans really want that kind of president?

Tyler O’Neil is the author of Making Hate Pay: The Corruption of the Southern Poverty Law Center. Follow him on Twitter at @Tyler2ONeil.

Amy Coney Barrett Is Following the Ginsburg Rule on Abortion and Obamacare. Dems Can’t Stand It

Pelosi Says 25th Amendment Move Is Not About Trump. Is It Preparation to Remove Joe Biden?!