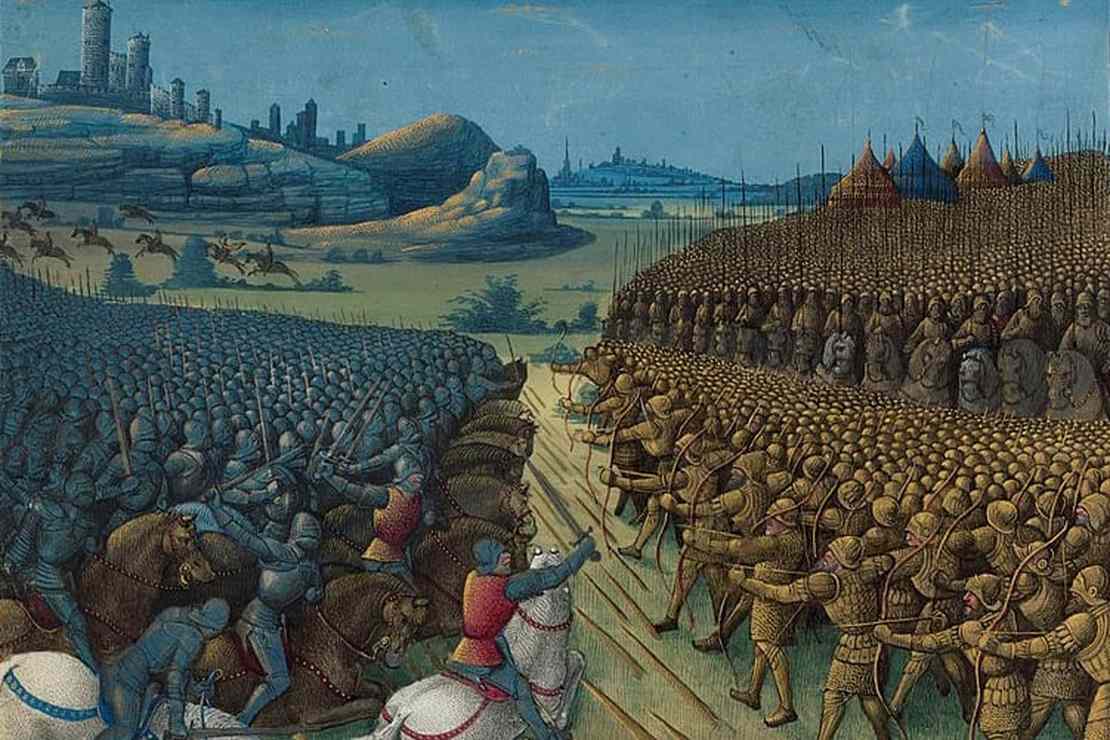 Today in history, on September 25, 1396, a major military encounter with Islam that demonstrated just how disunited Christendom had become took place.

In 1394, the Ottoman Turks “were doing great injury to Hungary,” causing its young king, Sigismund, to appeal “to Christendom for assistance.” It came at an opportune time. The hitherto quarreling English and French had made peace in 1389, and a “crusade against the Turks furnished a desirable outlet for the noble instincts of the Western chivalry.”

Matters were further settled once “men of all kinds”—pilgrims, laymen, and clerics returning from the Holy Land and Egypt—told of “the miseries and persecutions to which their Eastern co-religionists were subjected by the ‘unbelieving Saracen,’ and . . . appeal[ed] with all the vehemence of piety for a crusade to recover the native land of Christ.”

Western knights everywhere—mostly French but also English, Scottish, German, Spanish, Italian, and Polish—took up the cross in one of the largest multiethnic crusades against Islam. Their ultimate goal, according to a contemporary, was “to [re-]conquer the whole of Turkey and to march into the Empire of Persia . . . the kingdoms of Syria and the Holy Land.” A vast host of reportedly some one hundred thousand crusaders—“the largest Christian force that had ever confronted the infidel”—reached Buda in July 1396.

But numbers could not mask the disunity, mutual suspicions, and internal rancor that was evident from the start. Not only did the French spurn Sigismund’s suggestion that they take a defensive posture and forego the offensive, but when the king suggested that his Hungarians were more experienced with and thus should lead the attack on the Turks, the Frenchmen accused him of trying to take away their glory and set out to take the field before him. They easily took two garrisons before reaching and besieging Nicopolis, an Ottoman stronghold on the Danube. Victories and still no response from Bayezid led to overconfidence and complacency; dissolution set in and some sources say the camp became all but a brothel.

Suddenly, on September 25, 1396, as the Western leaders were feasting in a tent, a herald burst in with news that Sultan Bayezid—who only three weeks earlier was far away besieging Constantinople—had come. Without waiting for Sigismund’s Hungarians, who were still trailing behind, the Westerners instantly formed ranks and made for the first, visible line of the Ottoman force, the akinjis, or irregular light cavalry.

Although they made quick work of them, the vagabond horsemen had “veiled from the sight of the enemy a forest of pointed stakes, inclined towards the Christians, and high enough to reach the breast of a horse.” Many charging horses were impaled and fell—as volleys of arrows descended upon man and beast, killing many of both.

So considerable was the loss inflicted on the Christians. A young French knight called on the men “to march into the lines of the enemy to avoid a coward’s death from their arrows and the Christians responded to the marshal’s call.” Although the Muslim archers harrying them were scattered along a sloping hill, the unhorsed and heavily-armored crusaders marched to it on foot.

As they ascended, “the Christians struck vigorously with axe and sword, and the Ottomans retaliated with sabre, scimitar and mace so valiantly, and packed their lines so closely, that the issue remained at first undecided. But as the Christians were mailed, and the Ottomans fought without armor, the bearers of the Cross . . . butchered 10,000 of the infantry of the defenders of the Crescent, who began to waver and finally took to their heels.”

As the latter fled, another, larger host of Islamic horsemen became visible. The unwavering crusaders “hurled themselves on the Turkish horse, effected a gap in their lines, and, striking hard, right and left, came finally to the rear,” where they hoped to find and kill Bayezid with “their daggers [which they used] with great effect against the rear.”  Startled at this unusual way of fighting—reportedly five thousand Muslims were slaughtered in the melee—“the Turks sought safety in flight and raced back to Bayezid beyond the summit of the hill.”

At this point, the Western leaders called on their knights to stop, recover, and regroup; yet despite “their exhaustion, the weight of their armor, and the excessive heat of an Eastern summer day,” the berserkers pursued “the fugitives uphill in order to complete the victory.” There, atop the hill, the full might of the Muslim host finally became visible: forty thousand professional cavalrymen (sipahi), with Bayezid grinning in their midst.

Instantly and to the clamor of drums, trumpets, and wild ejaculations of “Allahu Akbar!” they charged at the outnumbered and now exhausted Christians. The latter valiantly fought on, “no frothing boar nor enraged wolf more fiercely,” writes a contemporary. One veteran knight, Jean de Vienne, “defended the banner of the Virgin Mary with unflinching valor. Six times the banner fell, and six times he raised it again. It fell forever only when the great admiral himself succumbed under the weight of Turkish blows.” His “body was found later in the day with his hand still clutching the sacred banner.”

Still, no amount of righteous indignation or battle fury could withstand the rushing onslaught. Some crusaders broke rank and fled; hundreds tumbled down the steep hill to their deaths; others hurled themselves in the river and drowned; a few escaped and got lost in the wood (a handful made it home from their odyssey years later, in rags and unrecognizable).

The Hungarians arrived only to witness the grisly spectacle of a vast Muslim army surrounding and massacring their Western coreligionists. Sigismund boarded and escaped on a ship in the Danube. “If they had only believed me,” the young king (who lived on to become Holy Roman Emperor thirty-seven years later) later reminisced; “we had forces in plenty to fight our enemies.” He was not alone in blaming Western impetuosity: “If they had only waited for the king of Hungary,” wrote Froissart, a contemporary Frenchman, “they could have done great deeds; but pride was their downfall.”

Though it failed, the crusade caused considerable damage to Bayezid’s forces: “for the body of every Christian, thirty Muhammadan corpses or more were to be found on the battlefield.” But the Islamic warlord would have his vengeance:

On the morning after the battle the sultan sat and watched as the surviving crusaders were led naked before him, their hands tied behind them. He offered them the choice of conversion to Islam or, if they refused, immediate decapitation. Few would renounce their faith, and the growing piles of heads were arranged in tall cairns before the sultan, and the corpses dragged away. By the end of a long day, more than 3,000 crusaders had been butchered, and some accounts said as many as 10,000.

Whether because hours of this “hideous spectacle of mutilated corpses and spilt blood horrified [even] Bayezid,” or whether because his advisors convinced him that he was needlessly provoking the West, “he ordered the executioners to stop.”

When news of this disaster spread throughout Europe, “bitter despair and affliction reigned in all hearts,” writes a chronicler. Never again would the West unite and crusade in the East. “Henceforward it would be left to those whose borders were directly threatened to defend Christendom against the expansion of Islam.” All of this was a sign of the times, of a burgeoning secularization that prioritized nationality over religion in the West. As historian Aziz Atiya notes in his seminal study of the battle:

The Christian army consisted of heterogeneous masses, which represented the various and conflicting aspirations of their countries and nascent spirit of nationality therein. The sense of unity and universality that had been the foundation of Empire and Papacy in the early Middle Ages was passing away, and in its place the separatism of independent kingdoms was arising. This new separatist tendency demonstrated itself amidst the crusading medley before Nicopolis. There was no unity of purpose, no unity of arms and companies, and no common tactics in the camp of the Christians. The Turkish army was, on the other hand, a perfect example of the most stringent discipline, of a rigorous and even fanatic unity of purpose, of the concentration of supreme tactical power in the sole person of the Sultan. For an increasingly isolated Constantinople, such developments boded ill.

Thanks to its cyclopean walls, the city of the Byzantine emperors managed to survive for another 57 years, falling to the Turks in 1453—thanks primarily to cannons developed by European turncoats contracted by the Ottomans.

Note: All quotations in the above account were excerpted from and documented in the author’s book, Sword and Scimitar: Fourteen Centuries of War between Islam and the West.  Raymond Ibrahim is a Shillman Fellow at the David Horowitz Freedom Center, a Distinguished Senior Fellow at the Gatestone Institute, and a Judith Rosen Friedman Fellow at the Middle East Forum.

(36039)
scription% (as of n/a - More infoProduct prices and availability are accurate as of the date/time indicated and are subject to change. Any price and availability information displayed on [relevant Amazon Site(s), as applicable] at the time of purchase will apply to the purchase of this product.)

(31783)
scription% (as of n/a - More infoProduct prices and availability are accurate as of the date/time indicated and are subject to change. Any price and availability information displayed on [relevant Amazon Site(s), as applicable] at the time of purchase will apply to the purchase of this product.)

(156)
scription% (as of July 24, 2021 - More infoProduct prices and availability are accurate as of the date/time indicated and are subject to change. Any price and availability information displayed on [relevant Amazon Site(s), as applicable] at the time of purchase will apply to the purchase of this product.)

(54332)
scription% (as of n/a - More infoProduct prices and availability are accurate as of the date/time indicated and are subject to change. Any price and availability information displayed on [relevant Amazon Site(s), as applicable] at the time of purchase will apply to the purchase of this product.)

(35582)
scription% (as of n/a - More infoProduct prices and availability are accurate as of the date/time indicated and are subject to change. Any price and availability information displayed on [relevant Amazon Site(s), as applicable] at the time of purchase will apply to the purchase of this product.)

(4591)
scription% (as of n/a - More infoProduct prices and availability are accurate as of the date/time indicated and are subject to change. Any price and availability information displayed on [relevant Amazon Site(s), as applicable] at the time of purchase will apply to the purchase of this product.)

(12938)
scription% (as of July 24, 2021 - More infoProduct prices and availability are accurate as of the date/time indicated and are subject to change. Any price and availability information displayed on [relevant Amazon Site(s), as applicable] at the time of purchase will apply to the purchase of this product.)