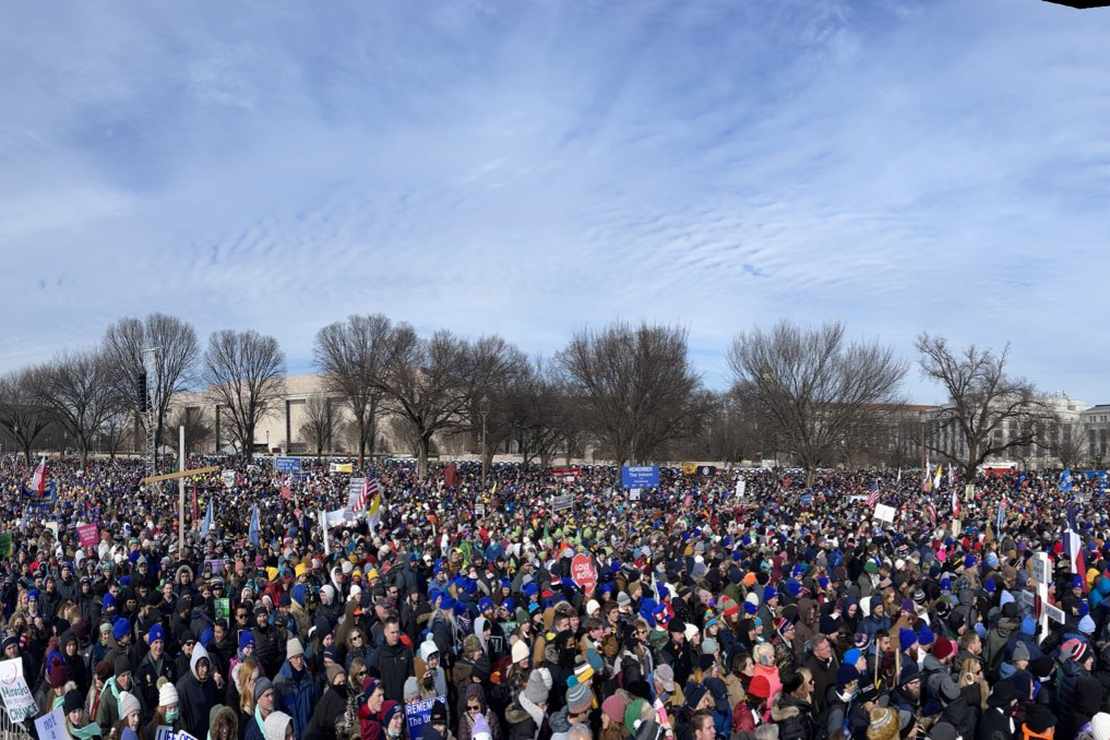 Temperatures that hovered in the low 20s didn’t deter tens of thousands of marchers from congregating in Washington, D.C., on Friday. 2022 marks the 49th anniversary of the infamous Roe v. Wade Supreme Court decision, which forbids states from restricting the controversial practice of abortion.

Today was the 49th annual March for Life, and participants are hopeful that this will be the last one as the Supreme Court considers the case of Dobbs v. Jackson Women’s Health Organization.

The theme for this year’s march was “Equality Begins in the Womb.” On its live stream page, a March for Life organizer asserts that “a culture of life recognizes the truth that each human being is endowed with inherent human dignity and is a gift to our world” — including human beings who have yet to be born.

Here is only half of the #MarchForLife rally crowd. 👀 pic.twitter.com/dmr6XSxvOB

The largest March for Life event was in 2013, with 650,000 participants. Vice President Mike Pence spoke at that gathering. In 2020, Donald Trump made history when he became the first U.S. president to address the March for Life. This year’s march may not have had record numbers or historic speakers, but there was an unprecedented spirit of hope, righteousness, and finally coming in sight of a long-fought-for victory.

Almost half a century ago, the Supreme Court decided in Roe v. Wade that women had a constitutional right to an abortion prior to the viability of the fetus they carried. The Cornell Law School explains the decision thusly:

But science has come a long way in the last 50 years, bringing public awareness and opinion along with it. The outdated concept of “trimesters” no longer fits with increasingly sophisticated technology that can now successfully nurture a baby born halfway through pregnancy.

Americans are aware of the humanity of pre-born children; only a third or so (34%) support abortions in the second trimester, and only 19% think it’s okay in the third trimester. But some states, such as Oregon, New York, New Jersey, and others, allow abortion up until birth, and over half of U.S. states permit the procedure well after a baby is viable. Roe v. Wade forces the entire country to permit abortion of pre-viable babies and frees individual states to permit the act throughout pregnancy.

During his term, President Trump and then-Senate Majority Leader Mitch McConnell were able to swing the liberal SCOTUS in a more conservative direction by appointing and confirming appropriate justices. The pro-Life movement became reinvigorated by the possibilities this opened up.

Then, last December, the Supreme Court heard arguments in the case of Dobbs v. Jackson Women’s Health Organization, which examines the constitutionality of a new Mississippi law that protects unborn babies beginning the 15th week of pregnancy. The crux of this case is whether states can restrict abortion before the unborn baby is physically viable. The understanding is that, if the state of Mississippi is allowed to keep its law protecting pre-viable babies, then Roe v. Wade no longer makes sense and will likely be discarded.

For Our VIP Subscribers: Upholding the Mississippi Abortion Law Would Be Mainstream

A decision in Dobbs v. Jackson is expected sometime in June. Since the 1973 Roe v. Wade decision, abortion has ended over 63 million nascent human lives. By this summer, we will know whether the killing will continue unabated or whether American society has learned enough over the last 50 years to make some changes.