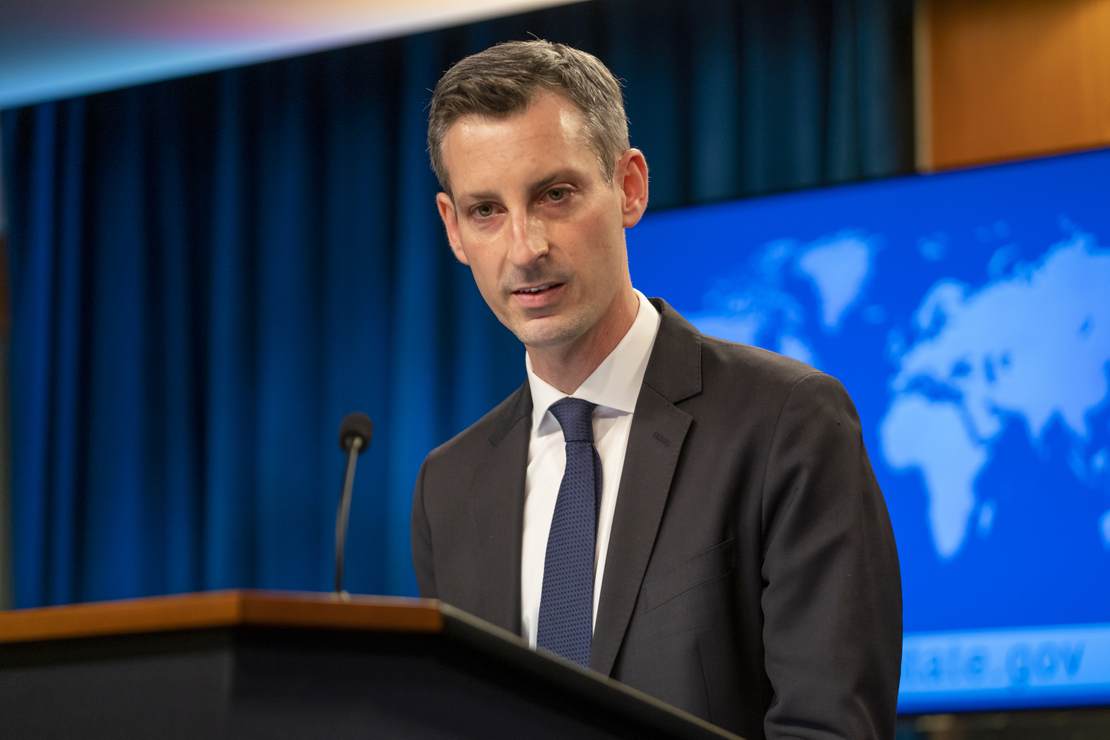 Old Joe Biden’s handlers, like Old Joe himself, are used to a sycophantic establishment media that does everything it can to cover for their multitudinous failures and defame and destroy anyone who dares oppose the administration’s far-Left agenda. Thus it must have come as quite a shock to Biden State Department wonk Ned Price on Thursday when Associated Press reporter Matt Lee challenged him to provide evidence of his claims that Russia was planning a false-flag attack by NATO as a pretext for war with Ukraine.

What got into Lee? Did he think Donald Trump was still in office? This wasn’t how the media was supposed to behave during a Democrat administration. Price was so upset that he absented himself from Friday’s briefing, without explanation. And it’s understandable: what if a member of the press asked him another hard question about the administration’s irresponsible saber-rattling and brinksmanship?

The kerfuffle started when Price claimed Thursday that “the Russians are considering, and which we made public today, involves the production of a propaganda video – a video with graphic scenes of false explosions – depicting corpses, crisis actors pretending to be mourners, and images of destroyed locations or military equipment – entirely fabricated by Russian intelligence.” Price said he was making this public “in order to lay bare the extent of Russia’s destabilizing actions towards Ukraine and to dissuade Russia from continuing this dangerous campaign and ultimately launching a military attack.”

Lee then asked Price to specify actions the Russians had taken that demonstrated that they weren’t interested in talks to resolve the crisis. Price responded, “The fact that Russia continues to engage in disinformation campaigns.” Lee, however, was having none of this: “Well no, you’ve made an allegation that they might do that. Have they actually done it?” After a testy back-and-forth, Price asserted: “We told you a few weeks ago that we have information indicating Russia also has already pre-positioned a group of operatives to conduct a false flag operation in eastern Ukraine. So that, Matt, to your Lee, is an action that Russia has already taken.”

Lee still refused to accept this unsupported assertion: “No, it’s an action that you say that they have taken, but you have shown no evidence to confirm that. And I’m going to get to the next Lee here, which is: What is the evidence that they – I mean, this is – like, crisis actors? Really? This is like Alex Jones territory you’re getting into now. What evidence do you have to support the idea that there is some propaganda film in the making?”

Price responded tautologically, first saying, “It is intelligence information that we have declassified,” and when Lee asked him where this declassified information could be found, Price said: “I just delivered it.” Doggedly, Lee insisted: “No, you made a series of allegations and statements —” Price then interrupted him to offer him a transcript of that very briefing, to which Lee said: “But that’s not evidence, Ned. That’s you saying it. That’s not evidence. I’m sorry.”

Related: Is State Department Spokesman Ned Price Gaslighting All of Us?

After the tense exchange went on for a bit longer, Price told Lee haughtily: “I’m sorry you are doubting the information that is in the possession of the U.S. Government.” In other words, an official of what is likely the most untrustworthy administration in American history was asking us to trust him, without evidence. Lee kept skewering Price’s disingenuousness, saying: “Yes, but you don’t have any evidence to back it up other than what you’re saying. It’s like you’re saying, ‘We think – we have information the Russians may do this,’ but you won’t tell us what the information is.”

The exchange continued, but with no more light than had already been shed on the issue: Price continued to insist that his bare assertion in itself constituted evidence, and Lee kept pressing him in vain to provide some real evidence. Price’s absence the day after this public shredding was telling: the Biden team is so used to the establishment media acting as its press agency that Lee’s effrontery and refusal to accept the nonsense Price was shoveling out was positively traumatic.

Price’s ineptitude was comical and emblematic of the Biden administration’s dishonesty and incompetence, but it was also ominous. Biden’s handlers are playing an extremely dangerous game, and it is entirely possible that all their wag-the-dog hysterics about Ukraine will not only accomplish their purpose of diverting attention from the abject failure of the administration but will land us in a genuine war with Russia, with consequences that no amount of dissembling and dissimulation from the likes of Ned Price will be able to mitigate.