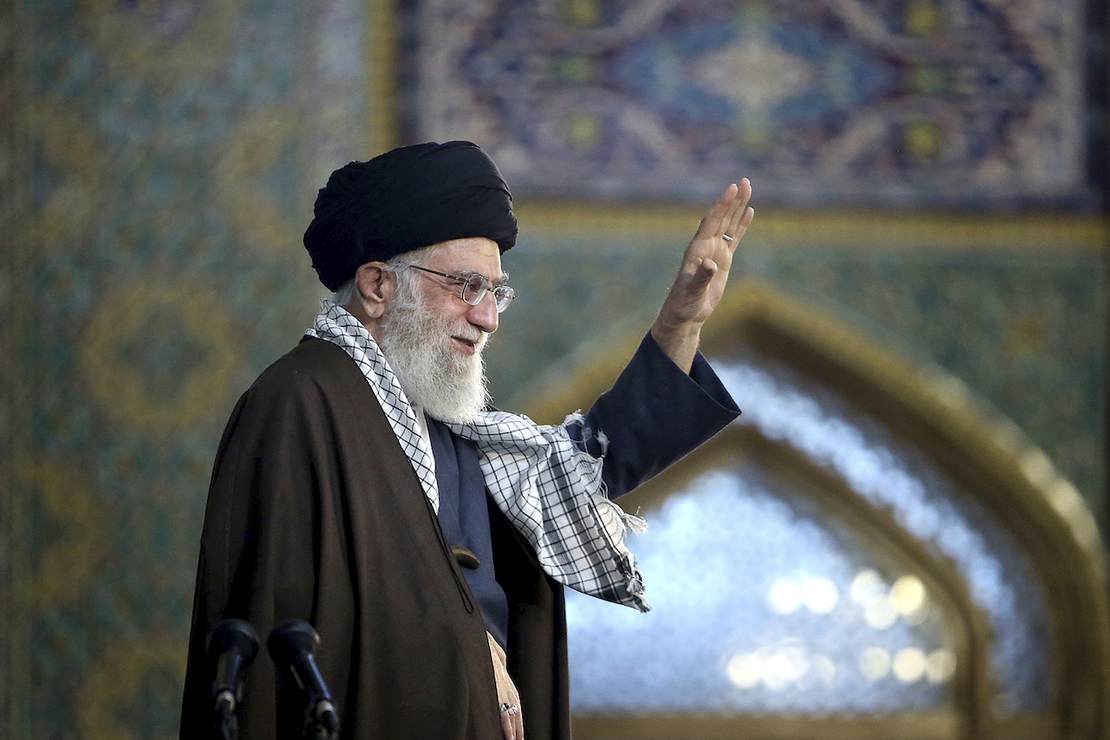 After Israel struck Iranian Quds Force installations in Syria on Wednesday, Iranian Foreign Ministry spokesman Saeed Khatibzadeh declared: “The Zionist regime is well aware that the era of hit and run is over….Iran’s presence in Syria is advisory, and naturally, if anyone disrupts this advisory presence, our response will be a crushing one.” Especially now, when the next president is likely to be as solicitous and helpful toward the Iranian mullahs as his old boss Barack Obama was. There are numerous signs that the mullahs assume that good times are ahead.

Iran’s state-controlled Mehr News Agency announced Sunday that the Islamic Republic is stepping up its nuclear program: Iran’s Permanent Representative to International Organizations Kazem Gharibabadi “says the country will operate 174 advanced IR-M2 centrifuges at Natanz nuclear facility.” Gharibabadi also took care to emphasize that “all of Iran’s nuclear activities are peaceful, carried out under the supervision of the IAEA, and the United States has no excuse to attack Iran.” No worries. With the foreign policy establishment firmly back in the saddle, doing anything to offend or oppose the mullahs is the last thing on anyone’s mind.

This looming new empowerment of the Iranian regime also has implications for the embattled communities of non-Muslims inside Iran. IranWire reported Sunday that “in simultaneous operations in various cities across Iran, security agents ransacked the homes of tens of Baha’is. Their personal effects, mobile phones, computers, laptops and religious books and pictures were all confiscated, and in a number of cases, the agents also reportedly took away any cash they found, along with national ID cards.”

One Baha’i was puzzled: “At a time when people are supposed to be working together and observe social distancing and avoid unnecessary traffic, unknown individuals – who might be carriers of the disease – came to Baha’i homes and touched everything on the pretext of an inspection. Isn’t such behavior contrary to public health guidelines?”

Sure. But the mullahs know that the severe threat to their regime that Donald Trump posed will soon be over. The Iranian nuclear deal that enables Iran’s nuclear program and opens the door for it to receive billions from a thoughtless, imprudent, and willfully ignorant West will soon be back on. So now is the time to step up its operations against the perceived enemies of the Islamic regime, that is, poor and defenseless non-Muslims.

And not just them, either. Iranian President Hassan Rouhani said recently: “It is not important who is elected president, as the next US administration will surrender to the Iranian nation.” It is likely indeed that Joe Biden’s regency for Kamala Harris will indeed “surrender to the Iranian nation,” as the disastrous precedent of the Obama/Biden administration makes clear.

Take, for example, the Iran nuclear deal, to which Biden has pledged to return. Few people are aware of just how bad it really was. The Complete Infidel’s Guide to Iran explains some of the deal’s very worst aspects. While the Joint Comprehensive Plan of Action (JCPOA), as the agreement is called, did include real restrictions on Iran’s nuclear activities, these were all slated to expire in the near future. The agreement anticipated the “conclusion of consideration of the Iran nuclear issue by the U.N. Security Council 10 years after the Adoption Day” — that is, the adoption of the agreement itself on July 14, 2015. It added: “There will be no additional heavy water reactors or accumulation of heavy water in Iran for 15 years.” But what about after that? The agreement didn’t say. Apparently, at that point, Iran would be free to build nuclear weapons with no objections from anyone.

The JCPOA also contained the provision that Iran could delay requested International Atomic Energy Agency (IAEA) inspections for up to 24 days — ample time to clean up for the inspectors. The agreement was, moreover, quite definite about removing all economic sanctions on Iran. This included the removal of sanctions that had originally been intended to be removed only when Iran definitively gave up its nuclear program; now the Islamic Republic would be being given sanctions relief and allowed to continue its nuclear program, only with certain restrictions that would all eventually expire anyway. Sanctions relief allows the Iranian mullahs to finance jihad groups worldwide.

The 159-page Joint Comprehensive Plan of Action was likewise conspicuously lacking in specifying penalties for Iran’s not holding to the agreement. Even worse, a secret side deal between the IAEA and Iran allowed the Iranians to conduct their own inspections of their own sites.

These terms were, obviously, absurdly easy on Iran. What exactly did the rest of the world get out of this agreement? Only a newly flush and increasingly bellicose Iran, thanks to Barack Obama. And possibly again soon, thanks to Joe Biden and Kamala Harris. The Iranian mullahs are assuming that, and so it’s time in Tehran to let the good times roll.

Robert Spencer is the director of Jihad Watch and a Shillman Fellow at the David Horowitz Freedom Center. He is author of 21 books, including the New York Times bestsellers The Politically Incorrect Guide to Islam (and the Crusades) and The Truth About Muhammad. His latest book is Rating America’s Presidents: An America-First Look at Who Is Best, Who Is Overrated, and Who Was An Absolute Disaster. Follow him on Twitter here. Like him on Facebook here.