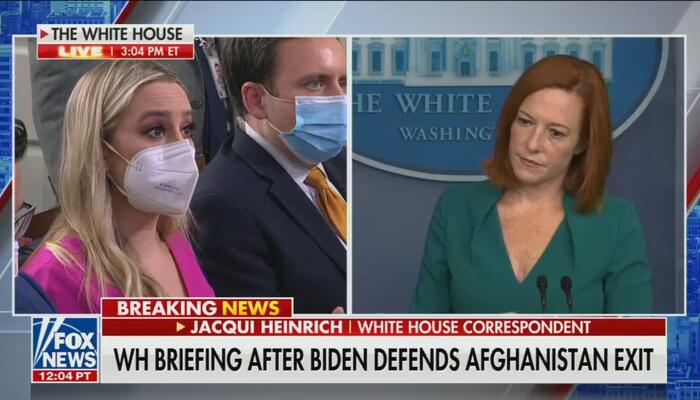 The continued decline of substantive Afghanistan questions continued on Wednesday’s edition of The Psaki Show with a shift towards the coronavirus and Texas’s abortion law, but ABC’s Stephanie Ramos and Fox’s Jacqui Heinrich kept up the heat with questions for Press Secretary Jen Psaki on the embarrassing collapse of the country following a two-decade war.

Along with other solid Afghanistan, questions from CBS’s Ed O’Keefe, Heinrich and Ramos honed in on a Reuters bombshell detailing a July 23 phone call in which President Biden pressured Afghan President Ashraf Ghani to “project a different picture” about the country’s state of affairs.

Ramos was the second reporter called on (after short abortion and Covid questions from the AP’s Josh Boak) and, after a question about Covid booster shots, she summarized the call reported by Reuters as one in which “both leaders appeared completely unaware that the Taliban would take over and…they discussed plans to project that Afghan forces were still in control.”

Invited to speak to its accuracy or offer any sort of comment, Psaki said she wouldn’t “get into private, diplomatic conversations or leaked transcripts of phone calls,” but would state that Biden’s belief that the Afghan government and military wouldn’t collapse was something “no one anticipated.”

Ramos waited out Psaki’s long answer to fire off a follow-up: “But did the President, at that point in time, have some sort of — a perception that even the former president of Afghanistan did not have that confidence in the Afghan forces? Is that why he was pushing Ghani to — to be more stern and to be confident?”

Psaki didn’t stray from her talking points, saying what mattered was the Afghan people showing a desire to “lead” and do so “in a cohesive manner.”

As for Heinrich, she started with a question O’Keefe tried and failed to get an answer on, which was the number of people who’ve been able to get out of Afghanistan since U.S. troops left.

Psaki punted to the State Department, adding that it’s necessary for the Taliban to first get the country’s airports back in operation and, in the meantime, the federal government will keep “tracking and staying in contact with all of the American citizens we are aware of.”

After a follow-up on when the administration could “readjust” if they’re unable to get the right information, Heinrich brought up the fact that the Biden administration even left journalists behind (click “expand”):

HEINRICH: And we’re hearing about some journalists who were left behind. Fox confirmed that a number of journalists working for U.S. Agency for Global Media, a federally funded agency of Congress, including Radio Free Europe and Radio Liberty journalists were left behind. And we’re now also hearing from some senior State Department officials that there were constraints getting people through the gates at HKIA, that some of the communication methods to contact people were available to so many that they were instantly ubiquitous, that those priority groups could not get through. Was that a contingency that was planned for?

PSAKI: Well, Jacqui, I think it’s important to remember again, 120,000 people made it out of the airport and out of the country and our commitment to people who want to evacuate, want to leave, American citizens, journalists, Afghan partners who have stood by our side is enduring and remains. I know there’s been some reporting on this, so let me give you just a couple of examples, because now we can talk about this, of some of the ways that we worked to get American citizens out. One, the most used method was the muster point or what we called the muster point. The State Department would blast notifications through a variety of channels to American citizens telling them to meet at a specific location from which we would either bus them into the airport in convoys or escort people on foot. We offered multiple opportunities for each of these muster points at various times, each with multiple transits to the airport. The majority of American citizens who got out were evacuated exactly this way. We also talk people through, one-on-one, walking into the airport with State Department officials on the phone — on the other end of the phone, the whole time facilitating safe passage, past checkpoints. This was incredibly labor intensive, but effective at resolving problems on the ground one by one in challenging environments. In limited cases, and some of this was reported, where people were trapped or in immediate danger, U.S. security forces went beyond the wire. Sometimes you have a helicopter to pick people up safely. We didn’t talk about these much — these “helo-hops” at the time because they were dangerous missions. We didn’t want to create the expectation that we’d be sending a helicopter for everyone who wanted to leave Afghanistan. So, I note those because I think it’s important to understand the steps and the roles that our U.S. military on the ground took far beyond just checking people off on a list at the gate to ensure we could get American citizens, our Afghan partners and others out, and we will continue those efforts through other means.

Heinrich closed out her lengthy, six-minute block with a follow-up to Ramos’s phone call questions: “I just want to put a pin in that report. Was the President in any way pushing a false narrative in that call with the Afghan President?”

Of course, Psaki didn’t crack since Reuters leaked “a private conversation” and Biden had only bought into what the rest of the world believed.

Going back to right after Ramos, O’Keefe asked a key question about the “concerns” that it’s possible a “small handful” of refugees who make it to the United States could be “deemed a security risk.”

Seeking “reassurances…about the screening process,” Psaki said she could “absolutely assure you that no one is coming into the United States of America who has not been through a thorough screening and background check process.”

And returning to the media’s abortion infatuation, NBC’s Mike Memoli led the way. Here were some highlights (click “expand”):

MEMOLI: And then quickly on abortion. We’ve seen in a number of states, Republican-led states, an effort on voting rights, for instance, to pass similar legislation throughout the country on voting rights. What’s the level of concern at the White House that the decision on Texas specifically will lead to a similar wrath of laws across the country? And what is the recourse for the White House at a federal level to help prevent this?

PSAKI: Well, the step that can be taken is for the codification of Roe, something the President and the Vice President have called for and would require Congress to act on. I will note that certainly we’ve seen, this is not the first threat to Roe we’ve seen in a state across the country. It’s an extreme threat and again, I would just note this is offering up to $10,000 to individuals who report someone who is going to get an abortion. I mean, that is what we’re talking about here. So — and — and beyond that, as I’ve already outlined. So, yes, of course, it’s of great concern and, of course, it’s of great concern because this is not the first time that there have been efforts by some in the country to prevent a woman from having the right to choose.

UNIDENTIFIED REPORTER: To come back to Texas again, so on one of those specifics, advocates are calling for the administration to lift restrictions on the abortion pill as more states, as was mentioned, are expected to follow Texas’s lead. Is the administration going to do that?

UNIDENTIFIED REPORTER: This has prompted many Democrats to look back at whether the Supreme Court should be reshaped. Has the president’s position changed on that, on expanding the Court?

PSAKI: As you know, there’s an ongoing Court reform committee that has been meeting. It’s a diverse group. They’re considering a range of issues and topics, including what the future of the Court looks like. I think the President will wait for that process to complete before making any evaluations. Go ahead, Karen.

KAREN TRAVERS: And to follow some of these, are steps that the administration is taking right now to work with Congress, to advance legislation. You know, you’re saying the President will continue to call for the codification of Roe, but is there something that this White House is actually doing right now on the Hill?

PSAKI: Well, it requires members of Congress themselves to voting to codify, right? But of course, in the range of conversations we have from senior leaders in the White House, there’s no question that this is a topic and will be a topic given the ruling or given the news this morning and these conversations with members and their staff.

It’s safe to say that, with this Texas abortion law, the liberal media may have found their opening to ditch Afghanistan.

To see the relevant briefing transcript from September 1 (including an excellent Afghanistan question from CBS News Radio’s Steven Portnoy about China seeking to fill the void left by the U.S.), click here.

(30)
$20.00 scription% (as of January 27, 2022 13:41 GMT -06:00 - More infoProduct prices and availability are accurate as of the date/time indicated and are subject to change. Any price and availability information displayed on [relevant Amazon Site(s), as applicable] at the time of purchase will apply to the purchase of this product.)

The Maid: A Novel

(2557)
$13.99 scription% (as of January 27, 2022 13:41 GMT -06:00 - More infoProduct prices and availability are accurate as of the date/time indicated and are subject to change. Any price and availability information displayed on [relevant Amazon Site(s), as applicable] at the time of purchase will apply to the purchase of this product.)

(48)
$39.99 scription% (as of January 27, 2022 13:41 GMT -06:00 - More infoProduct prices and availability are accurate as of the date/time indicated and are subject to change. Any price and availability information displayed on [relevant Amazon Site(s), as applicable] at the time of purchase will apply to the purchase of this product.)

$24.11 scription% (as of January 27, 2022 13:41 GMT -06:00 - More infoProduct prices and availability are accurate as of the date/time indicated and are subject to change. Any price and availability information displayed on [relevant Amazon Site(s), as applicable] at the time of purchase will apply to the purchase of this product.)

$9.91 scription% (as of January 27, 2022 13:41 GMT -06:00 - More infoProduct prices and availability are accurate as of the date/time indicated and are subject to change. Any price and availability information displayed on [relevant Amazon Site(s), as applicable] at the time of purchase will apply to the purchase of this product.)

(47)
scription% (as of January 27, 2022 13:34 GMT -06:00 - More infoProduct prices and availability are accurate as of the date/time indicated and are subject to change. Any price and availability information displayed on [relevant Amazon Site(s), as applicable] at the time of purchase will apply to the purchase of this product.)

The Betrayal of Anne Frank: A Cold Case Investigation

(65)
$24.75 scription% (as of January 27, 2022 13:41 GMT -06:00 - More infoProduct prices and availability are accurate as of the date/time indicated and are subject to change. Any price and availability information displayed on [relevant Amazon Site(s), as applicable] at the time of purchase will apply to the purchase of this product.)

(146)
scription% (as of January 27, 2022 13:34 GMT -06:00 - More infoProduct prices and availability are accurate as of the date/time indicated and are subject to change. Any price and availability information displayed on [relevant Amazon Site(s), as applicable] at the time of purchase will apply to the purchase of this product.)