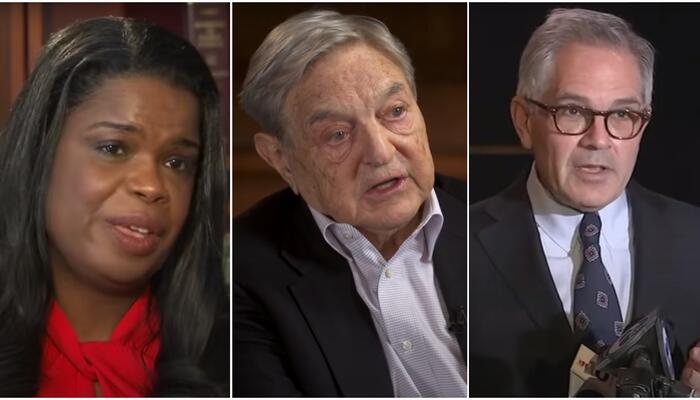 Soros money is like air — it’s everywhere, even if you don’t see it. A shocking report from the Capital Research Center uncovered at least “29 million in funding” that helped elect 23 leftist district attorneys across the country.

The Capital Research Center (CRC) report exposed George Soros’ multimillion-dollar scheme to elect district attorneys around the U.S. Soros has given at least “$29 million in funding … through a personal network of political action committees (PACs) formed specifically to back left-wing DA candidates,” since 2016, according to CRC researchers. [Emphasis added].

Among the district attorneys who received funding were the now-infamous Kimberly (Kim) Foxx, for dropping charges in the Jussie Smollett case, and Philadelphia district attorney Lawrence (Larry) Krasner. It was on Krasner’s watch that Philadelphia reportedly became the “murder capital of the United States” last July.

Soros’ money hit bull’s-eyes almost every time. “Soros cash has generously supported over 20 individual candidates, many of whom won their elections and remain in office today,” noted the report.

Foxx currently serves as Cook County State’s Attorney in Illinois. She was “boosted into office with the help of $2 million in Soros cash,” according to the report from CRC.

Foxx’s leadership was disastrous for the people of Chicago. In 2021, Foxx reportedly “presid[ed] over Chicago’s largest spike in homicides in more than 30 years. At the same time, her office dropped charges against 30 percent of felony defendants during 2020, as the CRC report observed.

Krasner is another radical district attorney who won a second term with Soros money. He currently serves as the Philadelphia District Attorney in Pennsylvania. But like former President Donald Trump once said, “Bad things happen in Philadelphia.”

Krasner has shown that things get worse when radical leftists come to power, according to CRC. “Under Krasner’s Watch, crime rates have soared” and murder has shot way up. CBS News Philly reported that the “number of homicide victims in Philadelphia this year is up to at least 314 people,” up “35%” from July, 2020. Most shocking are the numbers from the Philadelphia Police Department: Homicide victims have increased every year between 2018-21. Krasner assumed office in 2018. There were 353 homicide victims that year, and in 2021, there were 562. That is about a 59% increase in just three years.

Soros is not the only billionaire with a vested interest in electing rogue district attorneys. Mark Zuckerberg and his wife Priscilla Chan are co-CEOs of theChan Zuckerberg Initiative (CZI). The Washington Times reported that “[t]he Chan Zuckerberg Initiative … recently gave $1 million to the liberal Tides Center’s Fair and Just Prosecution project to ‘promote thought leadership for elected district attorneys.’” The Tides Center is another incredibly powerful and effective funnel of dark money to leftist causes. [Emphasis added].

Conservatives are under attack. Contact Open Society Foundations at (212) 548-0600 and the Chan Zuckerberg Initiative at (650) 352-7015 and demand unelected billionaires stop funding rogue DAs and other radical causes across the country.