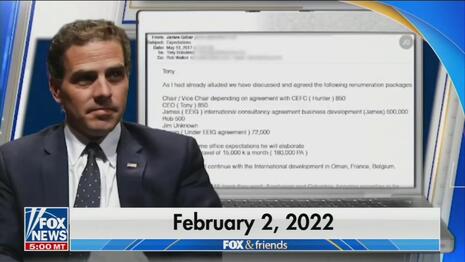 The New York Times announced this week it is suing Joe Biden’s State Department over a stonewalling attempt to avoid releasing e-mails connected to Hunter Biden. The paper, which, at certain points, has been protective of the troubled child of the President, apparently has woken up that this is a story.

The journalists at ABC, CBS and NBC, however, are not interested in this dramatic move by the outlet they consider to be the paper of record. They haven’t covered the Times‘s move yet.

The New York Post on Monday explained, “The New York Times is suing the State Department for allegedly withholding correspondence mentioning Hunter Biden and his former business associates that was sent or received by officials at the US Embassy in Romania.” Post writers Ben Feuerherd, Patrick Reilly and Bruce Golding explained:

The requests show the Times wants emails, memos and other records that involve Hunter Biden and crossed the desks of seven diplomats, including former US Ambassador to Romania Hans Klemm.

The first son’s former associates mentioned in the requests include Tony Bobulinski, who in October 2020 accused then-candidate Joe Biden of falsely claiming that he never discussed his son’s business dealings, saying, “I directly dealt with the Biden family, including Joe Biden.”

Fox News reporter Peter Doocy, on the other hand, did talk about it. Appearing on Fox and Friends, Wednesday, he noted, “The Biden State Department is not moving fast enough for the New York Times whose reporters filed freedom of information requests and they were told they weren’t going to be ready until last year.”

Doocy read from an NYT statement warning: “We are hopeful the government will promptly release any relevant documents and as always we are prepared to pursue our request through a lawsuit if necessary.”

This is quite the change for the Times. It wasn’t until September of 2021 that the paper removed the word “unsubstantiated” from a story on the Hunter Biden laptop scoop by the New York Post. NewsBusters Executive Editor Tim Graham explained:

In the original version of this story, Times reporters Shane Goldmacher and Kate Conger wrote:

The Federal Election Commission has dismissed Republican accusations that Twitter violated election laws in October by blocking people from posting links to an unsubstantiated New York Post article about Joseph R. Biden Jr.’s son Hunter Biden, in a decision that is likely to set a precedent for future cases involving social media sites and federal campaigns.

On January 21, 2021, the networks censored the latest Hunter bombshell, the revelation that new e-mails show he, and a former Joe Biden aide, invested heavily in Chinese companies with close ties to the communist government.

A partial transcript of Doocy on Fox and Friends is below. Click “expand” to read more.

PETER DOOCY: The Biden State Department is not moving fast enough for the New York Times whose reporters filed freedom of information requests and they were told they weren’t going to be ready until last year. So, the New York Times is suing the State Department and they say that in statement: “We are hopeful the government will promptly release any relevant documents and as always we are prepared to pursue our request through a lawsuit if necessary, just as on any line of reporting we will assess news worthiness of the material once we receive it.” The e-mails the Times wants are from 2015 when Joe Biden was
Barack Obama’s V.P. And Hunter was doing business in Romania. And in dealt in some way with officials at the U.S. embassy there. That’s what these emails get to the heart of. Now the New York Post editorial board is calling on the president to appoint a special counsel on Hunter Biden now.