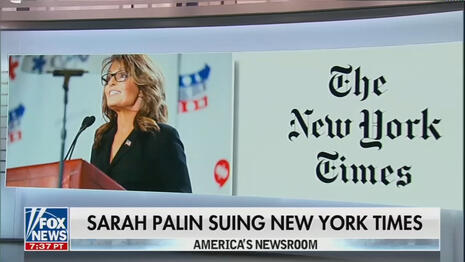 The Times is worried that the press’s free ride in the judicial system may be ending, as demonstrated in Jeremy Peters’ piece on the front of Monday’s Business section, “Sarah Palin v. New York Times Spotlights Push to Loosen Libel Law.”

The libelous editorial was published on June 14, 2017, the same day a Bernie Sanders’ supporter opened fire at a baseball field where Republican congressmen were practicing, injuring several people, including Rep. Steve Scalise. The headline was “America’s Lethal Politics.”

The fateful false paragraph from the original editorial:

In 2011, when Jared Lee Loughner opened fire in a supermarket parking lot, grievously wounding Representative Gabby Giffords and killing six people, including a 9-year-old girl, the link to political incitement was clear. Before the shooting, Sarah Palin’s political action committee circulated a map of targeted electoral districts that put Ms. Giffords and 19 other Democrats under stylized cross hairs.

Peters’ piece on the matter managed to work Donald Trump into the mix, noting his desire to scrap laws that offer the media protection from libel suits.

But a libel case that begins Monday in federal court in Lower Manhattan, Sarah Palin v. The New York Times Company, shines a spotlight on the many ways that Mr. Trump’s seemingly far-fetched wish may no longer be so unthinkable.

Peters singled out former editorial page editor James Bennet (kicked out in June 2020 by a woke brigade within the Times’ own staff) as the culprit.

The statements that Ms. Palin argues were defamatory were introduced during the editing process by James Bennet, who was then the editorial page editor for The Times….

The Times issued a couple of incomplete corrections to the editorial before finally getting it right. But where could Bennet have gotten that idea? From the Times’ own coverage, perhaps?

For in the aftermath of the shooting, committed by troubled 22-year-old man Jared Lee Loughner, the paper was obsessed with the non-related matter of a campaign map on the Facebook page of former vice presidential candidate Palin.

During last spring’s health care votes, the language used against some lawmakers was ratcheted up again, with protesters outside the House hurling insults and slurs. The offices of some Democrats, including Ms. Giffords’s in Tucson, were vandalized.

Ms. Giffords was also among a group of Democratic House candidates featured on the Web site of Sarah Palin’s political action committee with cross hairs over their districts, a fact that disturbed Ms. Giffords at the time.

“We’re on Sarah Palin’s targeted list,” Ms. Giffords said last March. “But the thing is the way that she has it depicted has the cross hairs of a gun sight over our district. When people do that, they’ve got to realize there’s consequences to that.”

But there was never any evidence that the mentally disturbed Loughner even saw Palin’s graphic, much less was a Palin supporter or was inspired by her to commit violence. (A similar target graphic was issued by the Democratic Leadership Council in 2004.) Loughner’s social media pages were filled with crazed syllogisms, dominated by thoughts of mind control.