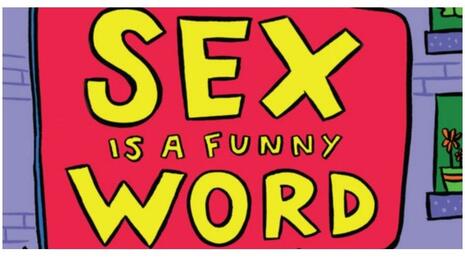 Monday’s front-page New York Times story — headlined “Politics Fuels Surge in Calls For Book Bans” — did liberal Democrats a favor, posing them in their flattering former costumes of fierce free-speech advocates. Meanwhile, today’s actual left-wing is a hive of free-speech squelchers and book banners, including the Times’ own reporters, who have an unseemly and anti-journalistic eagerness to “deplatform” voices they don’t like…when they’re conservative “bigots.”

The story by reporters Elizabeth Harris and Alexandra Alter began: “In Wyoming, a county prosecutor’s office considered charges against library employees for stocking books like Sex Is a Funny Word and This Book Is Gay.”

But the story used a typical tactic: avoiding all passages in and promotions of the controversial books. Sex Is a Funny Word is touted as “A comic book for kids that includes children and families of all makeups, orientations, and gender identities, Sex Is a Funny Word is an essential resource about bodies, gender, and sexuality for children ages 8 to 10 as well as their parents and caregivers.” It’s touted as “the first sex education book for this age group that is inclusive of lesbian, gay, and bisexual experience as well as gender creative and gender-nonconforming children.”

The catalyst for this story is a controversial decision by a Tennessee school board to remove from the curriculum the book Maus, a striking graphic novel telling a story of the Holocaust portraying Nazis as cats and Jews as mice.

Parents, activists, school board officials and lawmakers around the country are challenging books at a pace not seen in decades. The American Library Association said in a preliminary report that it received an “unprecedented” 330 reports of book challenges, each of which can include multiple books, last fall.….

Such challenges have long been a staple of school board meetings, but it isn’t just their frequency that has changed, according to educators, librarians and free-speech advocates — it is also the tactics behind them and the venues where they play out. Conservative groups in particular, fueled by social media, are now pushing the challenges into statehouses, law enforcement and political races.

Harris and Alter admitted deep into the story:

Book challenges aren’t just coming from the right: Of Mice and Men and To Kill a Mockingbird, for example, have been challenged over the years for how they address race, and both were among the library association’s 10 most-challenged books in 2020.

The left’s urge to squelch opposing views goes much deeper than two books. Besides the daily double standards of restrictions on Twitter, Facebook, and YouTube, Amazon.com pulled a book on transgender issues from its online shelf, and Netflix tried to cancel comedian Dave Chappelle for offensive jokes about transgenders.

The paper even tooted its own horn as if it were a victim of censorship as well.

In other instances, efforts to ban books are more sweeping, as parents and organizations aim to have them removed from libraries, cutting off access for everyone. Perhaps no book has been targeted more vigorously than The 1619 Project, a best-seller about slavery in America that has drawn wide support among many historians and Black leaders and which arose from the 2019 special issue of The New York Times Magazine. It has been named explicitly in proposed legislation.

The Times showed its contempt for free speech when a “child mob” at the paper forced the resignation of then-opinion editor James Bennet for having the audacity to publish an op-ed from Sen. Tom Cotton calling for deploying the military to quell rioting in the wake of George Floyd’s death.