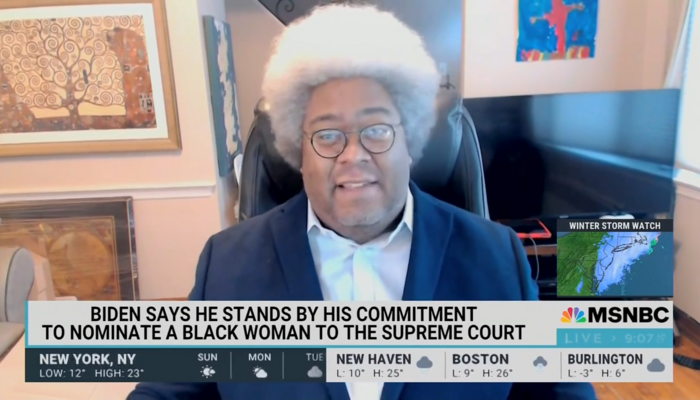 You knew MSNBC’s Cross Connection host Tiffany Cross would have MSNBC regular, Nation correspondent, and bombastic provocateur Elie Mystal on Saturday to discuss the open Supreme Court seat and sure enough, Mystal delivered, insisting that, whomever President Biden selects will be “immensely” and “immaculately qualified,” Republicans don’t believe in placing non-white, non-men on the bench, and he’d support the pick no matter what.

Mystal first demanded that Republicans explain why, if they’re looking for well-qualified candidates, they never considered the people reportedly on Biden’s list, such as Sherrilyn Ifill or Ketanji Brown Jackson?

Since Mystal was apparently being serious, we’ll explain this as simply as possible: Because they’re liberals and their judicial approach would be contrary to the constitutionalist, original-intent philosophy that Republicans favor. Would Biden consider — or Mystal support — a black woman who was a judicial conservative? Of course not!

As CNN’s Scott Jennings noted on Friday night, it’s worth looking up how Biden felt about Janice Rogers Brown.

Mystal next claimed that when it comes to judicial nominees, Republicans “will not give non-white, non-males a shot when they have their time in power.”

Again, Clarence Thomas anyone? And again, there were lower court nominees such as Brown and Miguel Estrada that Mystal’s team worked tooth and nail to block.

Mystal said he wouldn’t express a preference for a nominee of any particular background. Instead, he said that he’s for “everybody black.” Imagine someone saying they’re for “everybody white!”

Last time we looked, one-third of Trump’s SCOTUS nominees were “non-male,” although that hasn’t stopped Cross from repeatedly slurring Justice Amy Coney Barrett as “an actual Handmaid.”  And even as per the statistics that the show displayed, about 15 percent of Trump’s judicial appointments were non-white.

Finally, Mystal declared (and Cross agreed) that whomever Biden nominates “will be attacked in the most scurrilous, trifling, ways.”

Elie, you must be confusing the Republicans with the Democrats. They’re the ones who attacked Thomas and Brett Kavanaugh in scurrilous ways.

TIFFANY CROSS: Elie, you wrote a great piece in The Nation, and you highlighted the fact that Joe Biden really does have an embarrassment of riches when it comes to a nominee on the Supreme Court comprised of Black women. Curious about your thoughts on this process, and what you think the administration should prioritize?

ELIE MYSTAL: Yeah, look, the person that they pick will be immensely qualified. Immaculately qualified. And really what Republicans have to answer for me is, why haven’t these people been on their lists, right? If they’re so — they’re so interested in finding the best possible person regardless of race, color, or creed, regardless of gender, then tell me why didn’t you guys vet Sherrilyn Iffil, who has the same qualifications as Thurgood Marshall once did when he became the first black man on the Supreme Court?

Why didn’t you vet Ketanji Brown Jackson? She was on the short list for the Merrick Garland appointment. She’s a Harvard-educated lawyer who’s been the head of the U.S. Sentencing Commission. Aren’t you you like to be tough on crime sometimes?

Nah, nah. See, because these people will not give non-white, non-males a shot when they have their time in power, right?

That’s why President Trump nominated 85 of the 226 judges he nominated — he appointed — 85 percent were white. 75 percent were male. It is the other side that cares about race, color, and creed when making their judicial appointments. Not — not the Democrats right. So, for Biden, to emphasize a historically overlooked group, I don’t see what the problem is because, at the end of the day, he is going to find somebody with qualifications that are immaculate. You do not have a better resume than a Brown Jackson or a — or a Michelle Childs or a Sherrilyn Ifill. And so, I think he’ll — he’ll — he’ll pick a great one.

I’m very much on the — in terms of, like, who should he — I’m very much on the “I have room for everybody black.” Like, I don’t — I’m not picking through my favorites. I’m not choosing between my children — any — because here’s the thing. And this is important. Because whoever he picks, we know that they will be attacked in the most scurrilous, trifling—

MYSTAL: Whoever he nominates, I am going to, you know, lay down on the tracks to defend. And I hope that a lot of people will join me in that. So that’s why I really don’t want to get into, like, which qualifications matter more? Just, whoever he picks, I’m there.