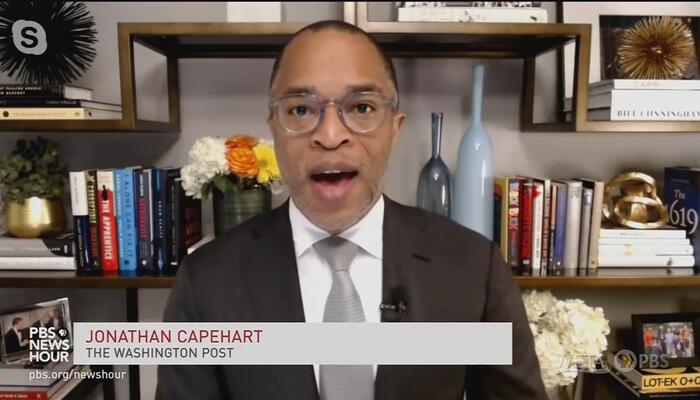 On the PBS NewsHour on Friday night, Washington Post columnist Jonathan Capehart insisted “no one serious out there wants to defund the police.” But his own newspaper’s editorial department came out with a big serious editorial in June 2020 lauding the whole movement as an idealistic reimagining of public safety. At the end of their Week in Review panel they discussed Biden’s remarks on crime in New York City.

JUDY WOODRUFF: Jonathan, just — I know it’s a big subject. Just 30 seconds left to talk about how this debate has shifted.

CAPEHART: It shifted in that, one, on defunding the police, no one serious out there wants to defund the police.

I think what President Biden and certainly Mayor Eric Adams are trying to do, they are trying to walk this line of support supporting the police, but also supporting communities who have serious concerns about how the police do their jobs in terms of protecting the community.

On June 9, 2020, the Washington Post Editorial Board wrote a florid article developing the idea of “reimagining” public safety alongside the far-left AOC types. And who was there to tweet it out?

The Post carefully endorsed the idea of redistributing police funds to other agencies:

Alongside demands for police reform, another demand has surfaced: Defund the police. This provocative slogan at its most constructive represents a welcome call to reimagine public safety in the United States….

it would make sense in many cases to invest in constructive alternatives at the same time or before existing institutions are downsized. The process should be led at the community level, because every community’s strengths and needs are unique, but a broader national conversation can expand our ideas of what is possible and what we deserve. Ultimately, the call to defund the police should be understood as a call to reinvest in communities and explore new solutions.

Obviously, Capehart realizes these words are now dangerous for Democrats at the polls. Why else would he suggest his own shop is unserious?