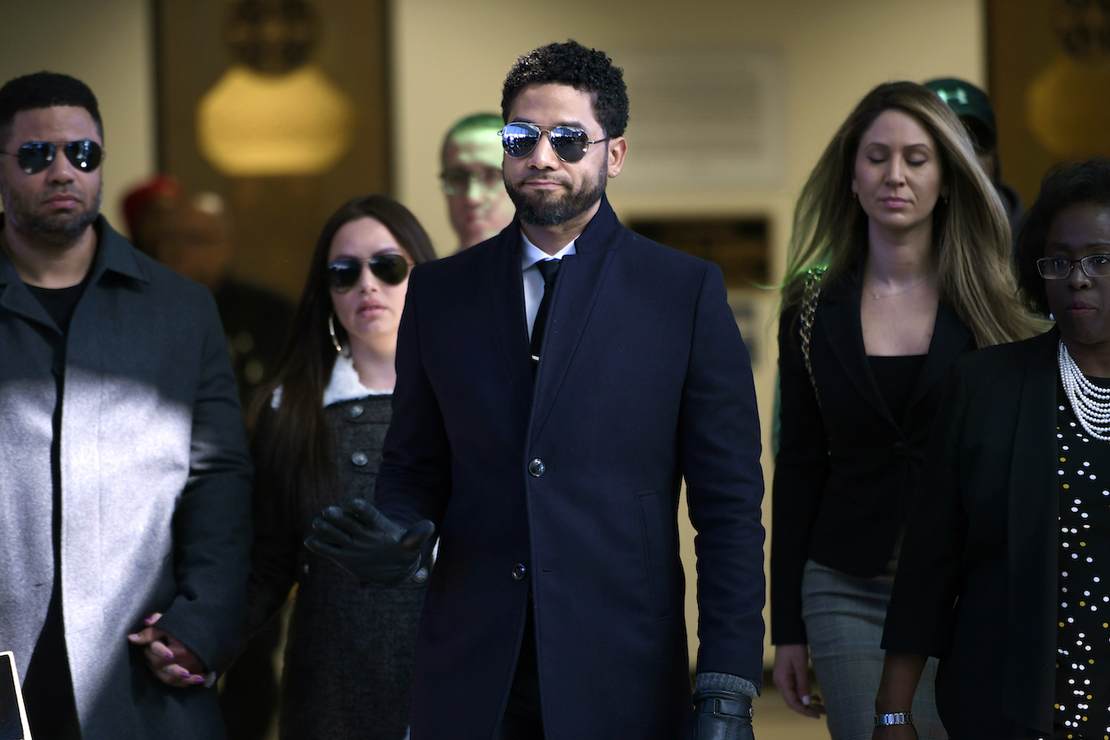 Yesterday we got through the defense questioning of Jussie Smollett on the stand. Today, prosecutor Dan Webb is cross examining him and there have been some interesting moments during what is clearly a contentious back and forth between the two. There are no cameras allowed at this trial (the defense objected) so we can only rely on tweets from people who are in the courtroom. In this case, most of them come from Chicago Tribune reporter Jason Meisner.

It sounds like Webb scored a point about the “dry run” of the attack, which took place the day before. He showed jurors video of Smollett’s car driving in circles around the area where the attack would later happen. Smollett has admitted both of the Osundairo brothers were in the car at the time though he denies they were planning an attack (as the brothers both claim). Smollett says the plan that day was for him to work out with Abel, only for reasons he can’t quite explain, Ola came along and no workout ever happened.

Prosecutor Dan Webb is resuming his slightly folksy questioning, getting Jussie to admit that he drove around Lakeview with the Osundairo brothers, but deny that he recruited them in the hoax attack during the ride.

Webb is working to an important point. If Smollett had picked up Abel to go workout, as he’s testified, why did Ola get in the car, why did they drive all the way to Streeterville and just turn around and go back to the Osundairos’ home?

You did what now?

Smollett says it was “weird” that Ola was with them and he had an interview set up so he decided to just scrap the workout plan.
He seems impatient with Webb’s repeated questions about whether he’s denying planning the hoax.

He circled the block three times but didn’t go to his house and instead decided to just drive back to where he picked up the Osundairo brothers. That does seem…odd.

Webb: Do you have any reason to disagree with police testimony that you passed by the intersection three times?
Smollett: I don’t know. I circled around the block.
Webb: How long were you there?
Smollett: Well you have the surveillance, you have to tell me. It was three years ago

Webb then moved on to the Instagram messages sent prior to the attack.

Testy back and forth going on here, with Webb interrupting Smollett and asking the judge to strike his answers as non-responsive. Judge Linn tells Smollett to listen to the question and don’t ad lib. This is all over whether the Instagram messages were public or sent only to Bola

Then Smollett suddenly claimed the language in his own Instagram messages was too offensive to be read out loud.

Webb reads a text from Smollett with the word “nigga” and Smollett stops him and asks him not to say it out loud, “out of respect for every African American in the courtroom.”
Webb apologizes, says why don’t you read it instead. “Apology accepted but that’s been used a lot.”

And now we’re up to the final hours before the attack.

We are now on to the attack. Webb asks if he’s denying that Smollett told Osundairo to do it right at the intersection near his building at 2 a.m.
Smollett: I’m saying that that’s a bold faced lie, yes.
You just happened to be there?
A: It’s difficult to answer with a yes or no

The entire tone of this cross is 180 degrees from yesterday. Smollett is on the defensive, annoyed. Webb keeps pressing him about the eggs. Smollett launches into a lengthy answer about diet and cleanses and such.
Webb: “Sir do you even remember what my question was?”

When Linn directs Smollett to answer the question, Jussie turns to the judge and says “I’m just concerned about answering yes or no.”
“Please, please,” Linn says. “It’s the same for all witnesses, it’s not personal to you. The lawyer asks questions, you answer them.”

Ultimately, there were no messages about a workout the next morning and neither of the Osundairo brothers ever showed up for a workout.

Smollett says he was attacked, wasn’t worried about session — but prosecutor pushes back and says — but there’s nothing to show that session was planned or scheduled.

Smollett says he didn’t recognize Bola’s voice during the attack but also that he’s not sure they were even there.

Webb: Do you doubt the Osundairo brothers’ testimony that they’re the ones seen on surveillance?
Smollett: I doubt every word that they say.
Webb: So is that them?
Smollett: I just don’t know. They’re liars, so.. they also said I had something to do with it and that’s not true.

Now we’re coming to a big lie Smollett told the police about his attackers:

Webb still questioning Smollett on his description of one of his attackers as white. Smollett acknowledges he later changed that to “pale.”
“I didn’t want to make the assumption that they were white. So I said let me change that and just say that they were pale skinned.”

Pale? This claim is so silly that Smollett’s attorney had to claim in a news interview that the brothers may have been wearing whiteface makeup under their ski masks.

One of the reasons I have a hard time taking (light skinned) Jussie Smollett’s charges of racism and homophobia too seriously is bc they put all the blame on the (dark skinned) Osundairo Brothers—who Smollett’s lawyers are painting as big, brute, down low liars pic.twitter.com/FNB9kUFbXc

Webb wraps up by noting once again that the alleged workout that was the reason for all of Smollett’s late-night messages to the brothers never got canceled and yet never happened, almost like it was never planned in the first place.

Very subtle but important point raised by Webb in all of
this: After all their supposed planning over this delayed workout, there wasn’t a single text message or call between Smollett and Osundairo the morning after the attack saying it had to be canceled.

Webb then shows Smollett an image of him from the Robin Roberts interview a couple weeks after the attack. Smollett asks Webb if he knows what a Hollywood interview is like and that he was in makeup that “makes me look much better.”
Webb’s just letting him take the bait.

That’s where Webb wrapped up his cross-examination. After a short break, one of Smollett’s lawyers tried to clean up a few things.

Smollett testifies that “tons” of his Instagram followers got his Instastory messages. Uche trying to reinforce that he was not giving Abel Osundairo private updates about his flight status on the night of the attack.

Uche asks if the Osundairo brothers reached out to him after the incident and said they’d tell the truth “that there was no hoax” if he gave them each $1 million.
Smollett: Correct.
Q: Did you give them the money?
A: No.

In case anyone on here is wondering, no one has ever been charged with sending that letter. The FBI had it analyzed and as of last year was still calling it an “ongoing criminal investigation.”

Then Webb got back up for a few more questions.

Webb finishes by asking about the alleged $2 million payment. Smollett says it wasn’t a direct ask. “Their lawyer or agent or agency communicated to my people. To my lawyers.”

And that’s it for Jussie Smollett’s testimony. He’s off the stand. The defense did call one other witness, an Uber driver who drove the brothers the night of the attack. And with that done the defense rested its case. Final arguments will take place tomorrow and then the jury will get the case.

JUST IN: Lawyers for #JussieSmollett have rested their case. pic.twitter.com/z1hPIzPAji

It’s really hard to believe anyone on the jury could buy Smollett’s silly story. It’s so obviously full of holes and there is so much evidence that this was organized in advance by people he was friendly with. To me, one of the clearest indications this was a hoax is that both of the Osundairo brothers are huge, muscular guys. If they’d really wanted to beat up Jussie Smollett, he’d have sustained a lot more damage than an imperceptible scar under his eye. The fact that he only had a few bruises (and that he claimed his attackers were white were white, excuse me, pale) all suggests he’s lying.

But if you lived through the OJ Simpson trial you already know there’s no telling how willing a jury might be to overlook the facts when a famous figure is involved. In this case, the stakes aren’t as high. Even if Smollett is convicted he’ll probably get probation and never spend a day in jail. That’s unfortunate because this hoax was a really selfish attempt to help his career at the expense of an entire group of people who were smeared as the villains in his little drama. Mendacity like that really ought to be punished even if it’s just a slap on the wrist.

Defiance of the Fall 5: A LitRPG Adventure

(244)
$6.99 scription% (as of May 22, 2022 16:57 GMT -05:00 - More infoProduct prices and availability are accurate as of the date/time indicated and are subject to change. Any price and availability information displayed on [relevant Amazon Site(s), as applicable] at the time of purchase will apply to the purchase of this product.)

(3976)
$7.97 scription% (as of May 22, 2022 16:54 GMT -05:00 - More infoProduct prices and availability are accurate as of the date/time indicated and are subject to change. Any price and availability information displayed on [relevant Amazon Site(s), as applicable] at the time of purchase will apply to the purchase of this product.)

$19.58 scription% (as of May 22, 2022 16:57 GMT -05:00 - More infoProduct prices and availability are accurate as of the date/time indicated and are subject to change. Any price and availability information displayed on [relevant Amazon Site(s), as applicable] at the time of purchase will apply to the purchase of this product.)

(46846)
$7.61 scription% (as of May 22, 2022 16:54 GMT -05:00 - More infoProduct prices and availability are accurate as of the date/time indicated and are subject to change. Any price and availability information displayed on [relevant Amazon Site(s), as applicable] at the time of purchase will apply to the purchase of this product.)

(11013)
$4.90 scription% (as of May 22, 2022 16:54 GMT -05:00 - More infoProduct prices and availability are accurate as of the date/time indicated and are subject to change. Any price and availability information displayed on [relevant Amazon Site(s), as applicable] at the time of purchase will apply to the purchase of this product.)

$49.99 scription% (as of May 22, 2022 16:57 GMT -05:00 - More infoProduct prices and availability are accurate as of the date/time indicated and are subject to change. Any price and availability information displayed on [relevant Amazon Site(s), as applicable] at the time of purchase will apply to the purchase of this product.)

The Little Blue Box of Bright and Early Board Books by Dr. Seuss: Hop on Pop; Oh, the Thinks You Can Think!; Ten Apples Up On Top!; The Shape of Me and Other Stuff

(11626)
$13.99 scription% (as of May 22, 2022 16:54 GMT -05:00 - More infoProduct prices and availability are accurate as of the date/time indicated and are subject to change. Any price and availability information displayed on [relevant Amazon Site(s), as applicable] at the time of purchase will apply to the purchase of this product.)

(20)
$389.99 scription% (as of May 22, 2022 16:57 GMT -05:00 - More infoProduct prices and availability are accurate as of the date/time indicated and are subject to change. Any price and availability information displayed on [relevant Amazon Site(s), as applicable] at the time of purchase will apply to the purchase of this product.)