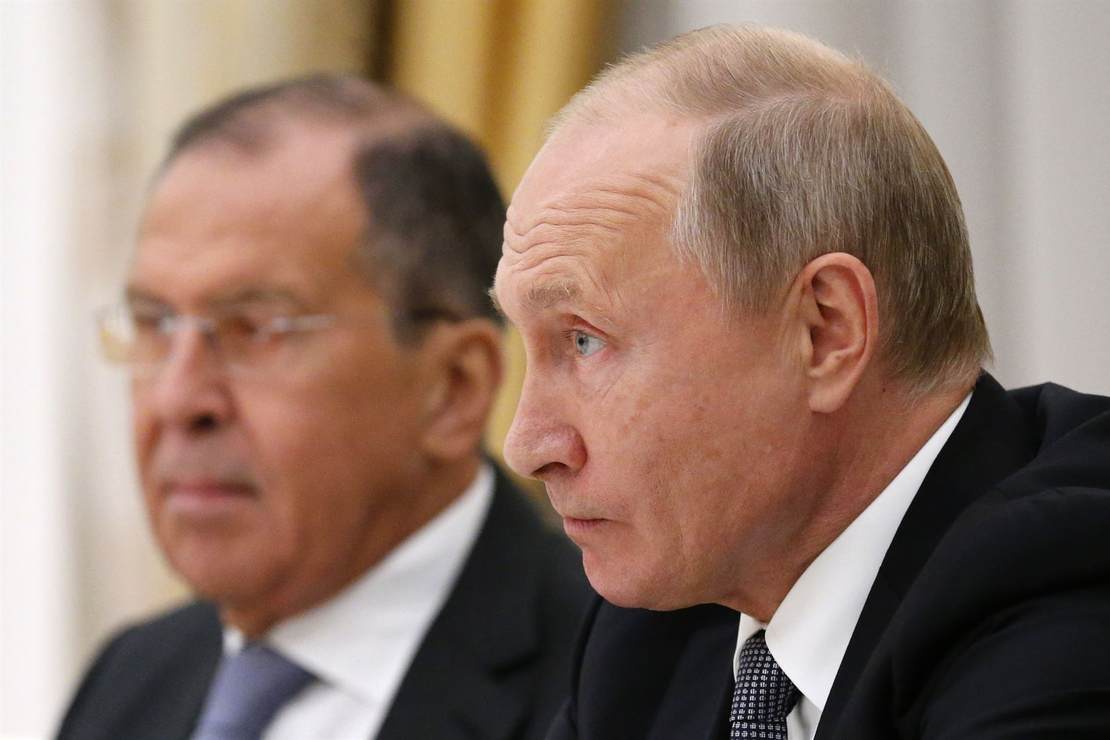 Is this “dialing down the temperature” on Ukraine, as the Associated Press put it? Or did Sergei Lavrov use Joe Biden’s vacillating language in Wednesday’s presser to put the US even further on the defensive? The Russian foreign minister insisted that the US and NATO respond in writing to its demands for a non-interference position in Ukraine, while Antony Blinken suggested that some progress had been made on cooling tensions.

This doesn’t exactly sound like progress, however. Lavrov wants us and Europe to party like it’s 1997, the Financial Times reports:

Russia wants Nato to remove all of its forces from Bulgaria, Romania and other ex-communist states in eastern Europe that joined the alliance after 1997, the foreign ministry said on Friday, underlining Moscow’s hardline position ahead of security talks with the US in Geneva.

Sergei Lavrov, Russia’s foreign minister, said in a written Q&A on the ministry’s website that Russia’s demands included “withdrawing foreign forces, equipment, and armaments and making other steps to return to the condition as of 1997”, when Nato began admitting former Warsaw Pact countries.

“That includes Bulgaria and Romania,” Lavrov said, adding that Russia’s demand was “core” and “deliberately worded as clearly as possible so as not to allow any dual interpretations”.

Bulgaria scoffed at the demand, pointing out that it makes its own sovereign decisions about membership in multilateral organizations now, not Moscow. The absurdity of this demand — and the impossibility of it ever happening — belies the idea that Vladimir Putin is negotiating in good faith over Ukraine, Belarus, or even Georgia. It does, however, bolster the idea that Putin’s dream of reassembling a Russian empire is not limited merely to bordering former Soviet republics.

The AP’s report barely alludes this absurd demand, and to Lavrov’s insistence on a written response to it:

“We don’t expect to resolve our differences here today. But I do hope and expect that we can test whether the path of diplomacy or dialogue remains open,” Blinken told Lavrov before they spoke privately. “This is a critical moment.”

Lavrov, meanwhile, said he did not “expect a breakthrough at these negotiations either. What we expect is concrete answers to our concrete proposals.”

Moscow has demanded that the NATO alliance promise that Ukraine — a former Soviet republic — will never be allowed to join. It also wants the allies to remove troops and military equipment from parts of eastern Europe.

The U.S. and its NATO allies have flatly rejected those demands and say that Russian President Vladimir Putin knows they are nonstarters. They have said they’re open to less dramatic moves.

Why not mention the Soviet — er, Russian, excuse me — demand to withdraw from all former Warsaw Pact nations? That would include Poland too, plus the Baltic states, all of whom should be seriously concerned about the threat this implies. The Washington Post skips over this demand too, never mentioning the Warsaw Pact demand as part of Lavrov’s insistence on a written explanation from the US:

Lavrov, speaking as the two men sat down for discussions in a Geneva hotel, said he was awaiting a formal U.S. response to proposals that Russia has put forward that would limit NATO’s expansion and activities in Eastern Europe.

Moscow has accused Ukraine of threatening Russian security by procuring foreign weaponry and aspiring to join the Western NATO alliance. The United States and its allies say it is Russia that threatens Ukraine by massing troops along its borders and preparing for a possible assault, like the one Moscow launched on Ukraine’s Crimea in 2014.

“What we expect is concrete answers to our concrete proposals,” Lavrov said through an interpreter, making reference to tenets of European security.

“I refer in particular to the principle of the indivisibility of security, as well as the obligation of countries not to strengthen their own security at the expense of security of others,” he said. “We would very much be interested to hear how the U.S. interprets these obligations and these principles.”

Recall when Hillary Clinton offered Lavrov a reset button, assuming that poor relations with Russia were the fault of the George W. Bush administration? Now we know that Putin and Lavrov want a reset to at least the Clinton administration, if not the Cold War itself. Putin wants NATO to retreat all the way back to Berlin, and will use Ukraine as leverage to get it.

Why reveal that now? It seems pretty clear that Putin was emboldened in the Obama-Biden administration to strike in Ukraine, with its seizure of Crimea and occupation-by-proxy of the Donbass. Joe Biden’s vacillation on European security and Russian energy adventurism has again emboldened Putin. Biden’s “minor incursion” fumble on Wednesday is just another example of his tired, confused, and lackluster performance, and a reveal as to the lack of commitment Biden has to collective security in eastern Europe. Putin and Lavrov smell blood in the water, and now they want Biden to write down a position they can manipulate to their advantage well past the Russian frontier.

And one has to wonder whether American media outlets are leaving out the specific security demands from Russia as a way to provide political cover for Biden as he fumbles his way through the Ukraine crisis. There doesn’t seem to be another explanation for that admission. As Glenn Reynolds writes today, it would contradict their narratives about both Biden and his predecessor:

Under Trump, the United States achieved energy independence, becoming a net exporter of oil and natural gas. Gas prices were low. The Keystone Pipeline, furthermore, promised to bring oil from Canada to the US heartland (“ethical oil” activists call it because it doesn’t come from a country dominated by dictators or Islamist enemies). Biden canceled that.

Gas prices have since skyrocketed, and people are unhappy, such that even NPR has noticed the Joe Biden “I did that!” stickers sprouting on gas pumps everywhere as ordinary Americans vent their frustrations. As for energy independence, Biden was reduced to begging OPEC to pump more oil to drive prices down. (OPEC, shockingly, declined.) High oil prices help Russia of course, since it’s a major oil producer.

And while Biden was blocking pipelines at home, he did manage to give US approval to the Nord Stream 2 pipeline connecting Russian gas fields to Europe, giving the Kremlin a huge cash infusion that will strengthen its position immeasurably while making Europe dependent on President Vladimir Putin, who could freeze them out by turning a few valves.

Indeed, and energy policy is only one aspect of Biden’s lack of strategic thinking on Russia. Be sure to read it all.