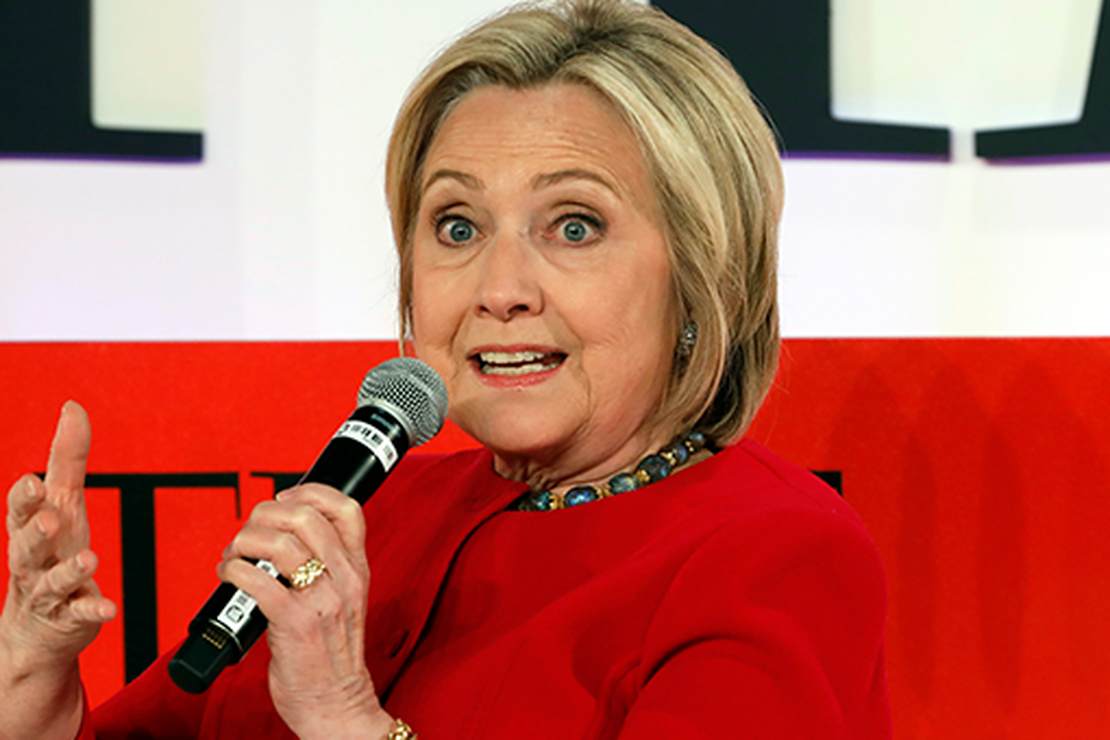 There’s only one person in the world more obsessed with shifting blame for an election they lost than Donald Trump.

Just in time for Galentine’s Day, and the news that Trump was flushing documents down White House toilets…

Thirty bucks. And it doesn’t ship for six to eight weeks! By then, the “Trump stealing top-secret documents” news cycle which she’s trying to exploit here will almost certainly be over, replaced by some scandalous new revelation from his time in office.

I like the trend of hardcore partisans broadcasting their politics with baseball caps, though. Just as the left shuns anyone wearing a red MAGA hat, it’d make things easier for conservatives if Democrats walked around in “But Her Emails” apparel. Imagine being able to tell that someone is liberal and Very Online at a glance, from yards away.

But give the devil her due. The fact that Trump apparently carted off highly sensitive documents to Mar-a-Lago does make things awkward for Trumpers who rode Emailgate to victory in 2016. Bret Baier raised the subject on his show last night, confronting his panelists — and Fox viewers — with the awkward turnabout.

Bill Bennett replied with some throat-clearing that, yes, it’s concerning *but* how can we believe the media after it’s gotten big things wrong in the past, like the Russian dossier? Which is fine, but leaves Bennett open to an obvious follow-up: If it turns out that the reports are true, that Trump really did take top-secret documents with him to Mar-a-Lago, what sanction does your “concern” over the issue lead you to recommend?

Declare him unfit for office, as Republicans did with Hillary amid Emailgate?

Hugh Hewitt was also asked by Baier what he thought and didn’t fall into the “it’s bad if it’s true” trap. It may well be true, he said, but only the progressive left will care.

Which is … an answer. Not much more of an answer than “bad when they do it, fine when we do it,” but an answer. If it’s our guy rather than their gal who’s in the hot seat for misconduct which we repeatedly deemed disqualifying in a presidential candidate six years ago, then we look the other way. Simple.

He’s not the only one in that position. Chris Truax went digging through social media archives to gauge Republican reaction to another famous example of a Democrat mishandling a document, the moment when Nancy Pelosi theatrically tore up a cope of the speech Trump had just delivered at the State of the Union in 2020. Some MAGAs weren’t just pissed, they were talking about criminal charges:

If Trump broke this law the Democrats would try to impeach him… https://t.co/X5PQNDN7us

BREAKING: I’m filing an ethics complaint against @SpeakerPelosi for destroying @realDonaldTrump‘s State of the Union speech.

Her conduct was beneath the dignity of the House, and a potential violation of law (18 USC 2071).

Nobody is above the law. She must be held accountable. pic.twitter.com/dXPPWQNtI8

It wasn’t only Don Jr and Gaetz. Truax quotes Trump himself: “Well, I thought it was a terrible thing when she ripped up the speech. First of all, it’s an official document. You’re not allowed—it’s illegal what she did.”

I doubt that Pelosi’s copy of Trump’s speech was an “official document” for purposes of federal law. But given Trump’s own well-chronicled habit of tearing up documents as president when he was done with them, it’s … interesting that he’s on record acknowledging that that’s illegal.

Seems only fair that we send both him and Pelosi away to prison for their “illegal” activity. I bet many members of Congress in both parties would accept that compromise, too.

Exit question: Are there any principles in modern politics that shouldn’t be instantly abandoned once it’s your side that’s inconvenienced by them rather than the other side? How about protesters blocking traffic for their cause? Bad when they do it but fine when we do it, or just bad?