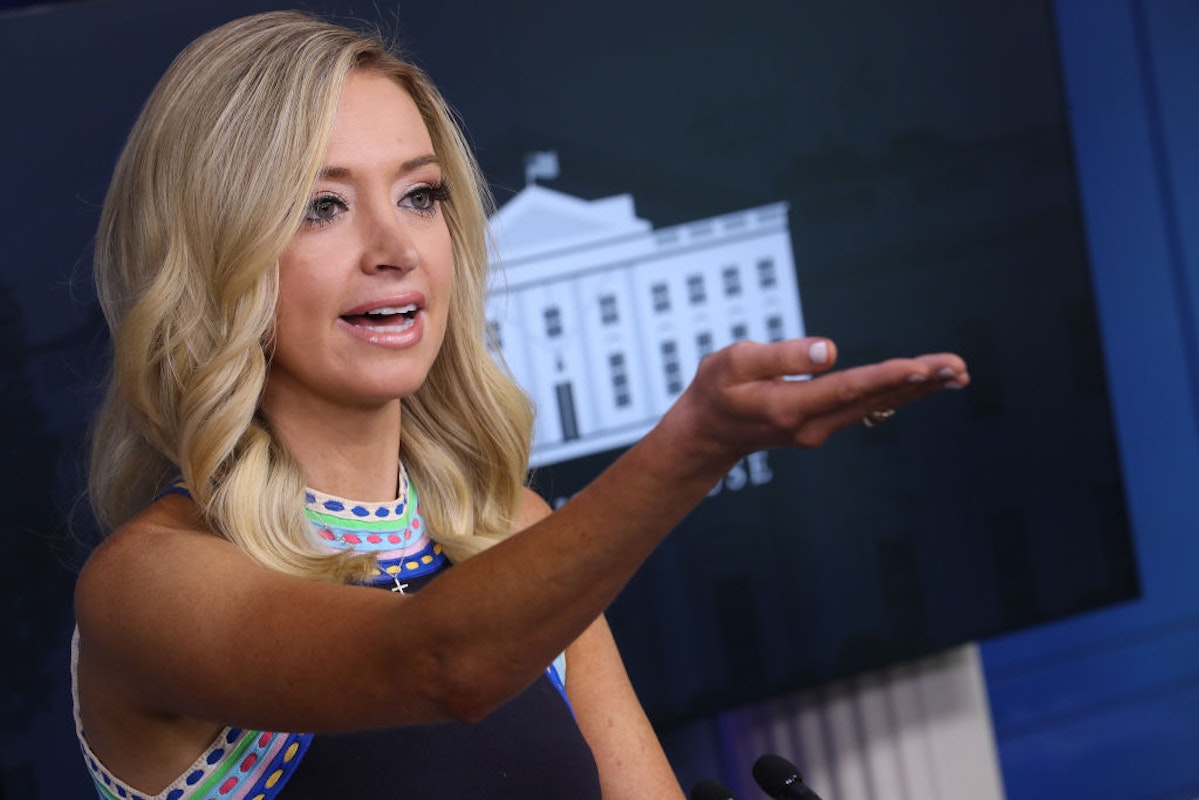 On Thursday, speaking at a White House press briefing, White House Press Secretary Kayleigh McEnany said she could confirm that ballots for President Trump were found “cast aside” in Pennsylvania.

A reporter prompted McEnany by asking, “So, Kayleigh, yesterday when the president said, ‘Get rid of the ballots, there won’t be a transfer, frankly, there’ll be a continuation,’ which particular ballots is he talking about wanting to get rid of and why does he think that will help him get elected?”

McEnany responded, “The president wants to get rid of mass mail-out voting, and that’s not because of — he’s said clearly that that could go either way; it could damage either candidate’s chances, because it’s a system that’s subject to fraud. In fact, in the last twenty-four hours, police in Greenville, Wisconsin found mail in a ditch and it included absentee ballots. And also, I can confirm for you that Trump ballots, ballots for the president were found in Pennsylvania and I believe you should be getting more information on that shortly. Here in the last 24 hours they were found cast aside.”

The reporter pressed, “So why in the past hour did the president tweet out, ‘Vote-by mail in my home state of Florida begin going out today! Make sure to request yours, fill it out & send it in.’”

“The president has always made the distinction that absentee ballots, where you go through a process, where you request a ballot and you mail that in, that is a system that works,” McEnany explained. “But a system where you mass mail out to voter rolls, which are not kept and maintained, where in Los Angeles County, for instance, you have 120% of the county enrolled; that system is untenable. It doesn’t work; it leads to what we saw in Nevada, where there were ballots languishing in trash cans and pinned to apartment boards.”

The reporter, still unsatisfied, queried, “Finally, today FBI Director Wray testified on the Hill that he has ‘not seen historically any kind of coordinated national voter fraud effort in a major election whether it’s by mail of otherwise.’ So if the president’s own FBI Director says this isn’t a problem, why does the president keep saying it is?”

“Well, as Attorney General Barr has said, we’ve never had an election where we’ve done mass mail-out voting like this before,” McEnany answered. Then she quoted one famous Democrat to buttress her assertions:

I would point you to a bipartisan study done by none other than Jimmy Carter, who said that these mail-in votes remain the largest source of potential fraud, and he even cited an example of a 1997 Miami mayor election that resulted in 36 arrests for absentee ballot fraud. That election had to be rerun and the results were reversed. That is an example from 1997 but there are many others, like Paterson, New Jersey, where four men were charged with voting fraud recently; four more men were charged in California and there’s a ton of examples. I could get you an encyclopedia of fraudulent examples we’ve had.

On Thursday, the Department of Justice released a statement regarding Pennsylvania ballots, which reads in part:

Since Monday, FBI personnel working together with the Pennsylvania State Police have conducted numerous interviews and recovered and reviewed certain physical evidence. Election officials in Luzerne County have been cooperative. At this point we can confirm that a small number of military ballots were discarded. Investigators have recovered nine ballots at this time. Some of those ballots can be attributed to specific voters and some cannot. All nine ballots were cast for presidential candidate Donald Trump.

Our inquiry remains ongoing and we expect later today to share our up to date findings with officials in Luzerne County. It is the vital duty of government to ensure that every properly cast vote is counted.

Editor’s note: This article has been updated to include the statement from the Department of Justice regarding Pennsylvania ballots.