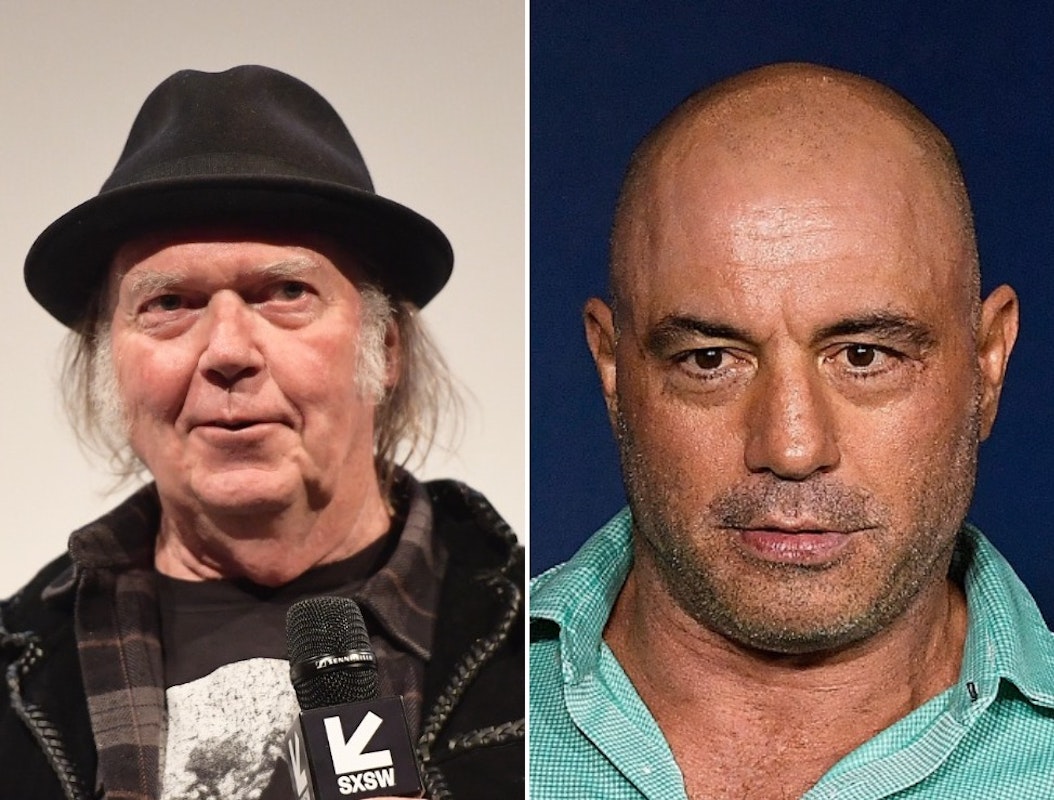 It sounds like Spotify will need to choose a side.

Musician Neil Young issued a bold ultimatum in a now-deleted message to his management team and record label. The letter said the 76-year-old musician was planning to refuse the music streaming service access to his catalog of albums until they cut ties with podcast host Joe Rogan.

“Please act on this immediately today and keep me informed of the time schedule,” Young shared in the letter.

“I want you to let Spotify know immediately TODAY that I want all my music off their platform,” he continued. “They can have [Joe] Rogan or Young. Not both.”

“With an estimated 11 million listeners per episode, JRE, which is hosted exclusively on Spotify, is the world’s largest podcast and has tremendous influence,” the letter continued. “Spotify has a responsibility to mitigate the spread of misinformation on its platform, though the company presently has no misinformation policy.”

The Canadian-American musician is referring to claims that Rogan spreads “vaccine disinformation” by hosting guests with a variety of different opinions on his massively popular podcast.

Rogan has made plenty of controversial statements that got him into trouble with mainstream media. But the most recent catalyst for debate happened when the podcaster interviewed Dr. Robert Malone after the medical researcher was banned from Twitter over alleged COVID-19 misinformation.

This prompted 270 members of the medical community to send an open letter to Spotify demanding they implement a disinformation policy, especially in light of the Joe Rogan Experience episode in question.

“By allowing the propagation of false and societally harmful assertions, Spotify is enabling its hosted media to damage public trust in scientific research and sow doubt in the credibility of data-driven guidance offered by medical professionals,” the letter read.

This also wasn’t the first time Young took issue with Spotify hosting his music. The artist had his songs removed from Spotify in early 2015 over sound quality issues, Rolling Stone reported. But the “Harvest Moon” artist changed his mind on that move.

“That’s where people get music,” he explained to Rolling Stone in 2019. “I want people to hear my music no matter what they have to get through to do it. I’m just trying to make it so they hear a lot more and enjoy it a lot more, but sell it for the same price because music is music.”

Following Young’s most recent announcement, social media erupted with opinions on both sides of the issue. “I enjoyed listening to you Neil @Neilyoung you’ll be missed,” Jordan Peterson tweeted on Tuesday.

There’s a good chance Spotify will just ignore this latest outrage and hope it goes away, however. That’s because JRE pulls in a massively huge listening audience, which is a boon for the platform. A recent report found that Rogan’s audience exceeded the traffic of top news shows including highly-ranked programs on Fox News and CNN during the third quarter of 2021.