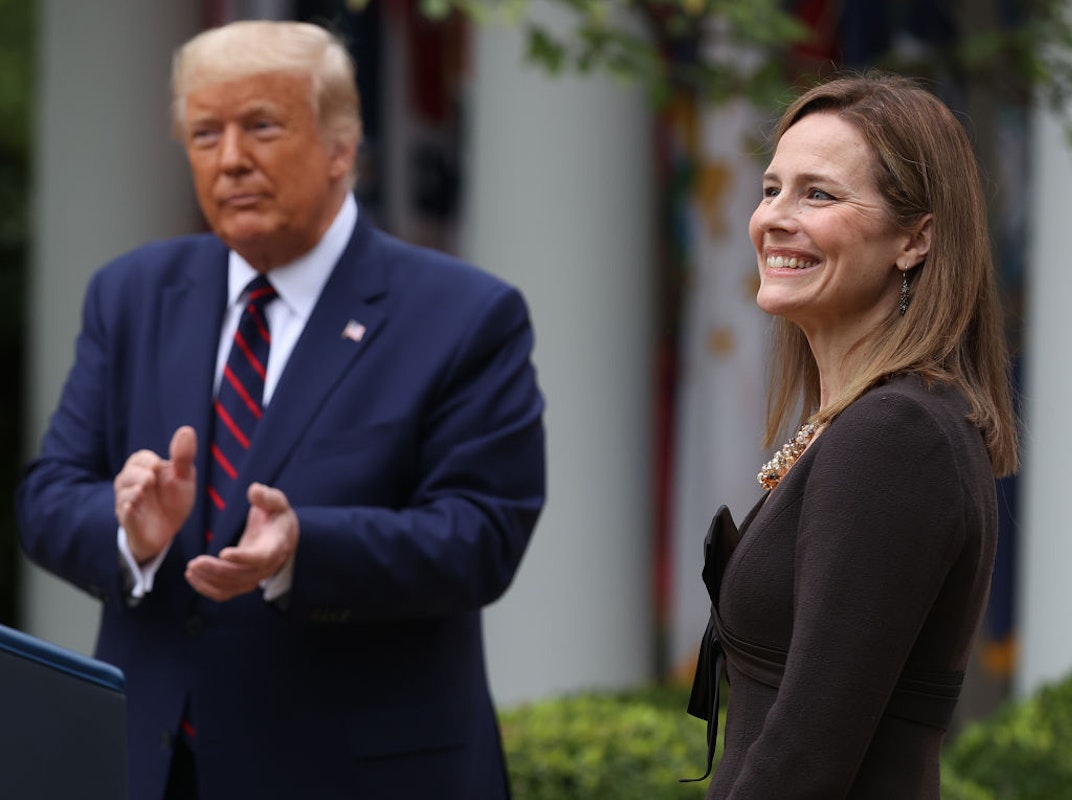 Judge Amy Coney Barrett may be in line to replace the late Justice Ruth Bader Ginsburg on the Supreme Court, but leftists are out to stop conservatives from usurping another hand-me-down from the “Notorious RBG:” her nickname.

Before Barrett was officially nominated to Ginsburg’s seat, groups pressing for her selection began selling tee shirts naming Barrett the “Notorious ACB” — a play on Ginsburg’s branding — or, alternatively, “Glorious ACB,” a reference to Barrett’s Catholic faith, which has become a front-and-center issue in the media.

The new monikers, though, aren’t sitting well with die-hard Ginsburg fans who took to Twitter and to the pages of left-leaning outlets to complain that conservatives were appropriating what rightfully belonged to “RGB.”

“Please stop calling her ‘ACB’. It demeans #RBG and the rest of us,” one social media critic claimed.

“Conservatives calling this woman ‘ACB’ make me sick,” moaned another. “She will never be RBG.”

That might be good news to Barrett’s fans, who are likely hoping that Barrett wins speedy confirmation to the Supreme Court, giving conservatives a 6-3 edge (or, in some cases, at least a comfortable 5-4) over the Court’s more “liberal” justices.

Other critics connected “ACB” to the Trump administration’s controversial decision to pursue filling Ginsburg’s seat less than 40 days out of an election.

“They’re stealing RGB‘s nickname on top of her seat,” one social media user complained. “ACB didn’t earn this. The GOP is sick and cruel.”

Left-leaning media outlet Slate even went so far as to suggest that the “Notorious ACB” nickname was an example of “contempt” on the part of Republicans looking to replace Ginsburg quickly — and a blow against Ginsburg’s achievements in the name of feminism.

“Applying Ruth Bader Ginsburg’s nickname to Amy Coney Barrett is deliberately degrading,” Slate reporter Dahlia Lithwick claims. “The White House rollout of Judge Amy Coney Barrett as candidate for the seat has gone beyond erasing Ginsburg’s legacy—they are stealing the trappings of that legacy and stripping it for parts.”

“There are now grotesque GOP T-shirts that imply that 60 years of unprecedented and brilliant legal advocacy by Ginsburg could simply be reappropriated by someone else because she too is a woman in possession of three names,” Lithwick continues. “This comedic implication—that Barrett is the natural inheritor of Ginsburg’s legacy—is depraved.”

Lithwick goes on to suggest that the only thing “feminist” about Barrett is that she happens to be a woman.

“As Donald Trump explained when he introduced her, Barrett’s work to dismantle Ginsburg’s legacy in abortion, health care, discrimination, and gun rights is to be construed as pro-women simply because a woman will be doing it. Even Barrett’s own remarks relied on co-opting Ginsburg’s reputation and legacy, as if the fact that one’s husband is the better cook is the only hallmark of female empowerment,” Lithwick claims, before fretting that it is conservatives — and not leftists — who are casting Barrett, the heralded mother of seven, acclaimed jurist, and law professor — as a mere imitation of greatness.

“ACB’s” nomination process is slated to begin October 16th, which Republicans hoping for an up-or-down vote in the full Senate the final week of October.