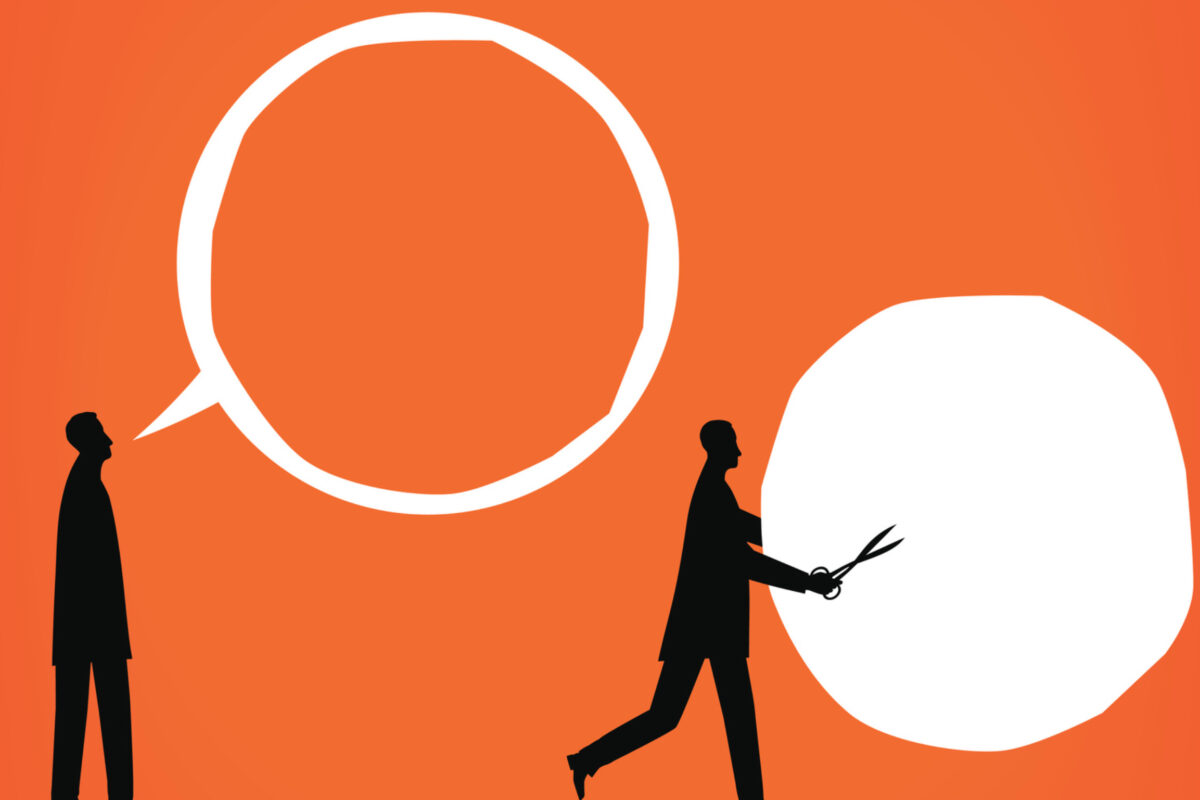 This week’s flagrant election interference by Twitter and, to a lesser extent, Facebook presents an even greater threat to free speech than it appears on the surface. The cyber-thugs who tried to kill a respected newspaper’s report on Joe Biden’s alleged influence peddling are only the sharp end of the spear of a far-sighted philosophical attack on the First Amendment. They’re not just trying to win an election. They’re trying to shut conservatives up for good.

Before I get to that though, let’s first put aside this bogus argument that since Twitter and Facebook are private companies, they can do as they please. Our right to speak our minds is given to us by God. The First Amendment protects that God-given right from the feds, but private businesses are no more permitted to interfere with it than the feds are. Mark Zuckerberg may be richer than God. He may think he’s God. But he’s not. These platforms need to be re-regulated to make their censorship stop.

But that won’t solve the bigger problem, which is: Now that they are losing the argument, the Left no longer believes in free speech.

Last Sunday, The New York Times Magazine ran a story entitled “The Problem of Free Speech in an Age of Disinformation,” by legal writer Emily Bazelon. The article begins with a sanitized description of a left-wing scam: a meeting of anti-Trumpers at George Washington University that supposedly gamed-out possible reactions to the upcoming election. In an article in The Washington Post, the head of the scam, Rosa Brooks, declared, “With the exception of the ‘big Biden win’ scenario, each of our exercises reached the brink of catastrophe, with massive disinformation campaigns, violence in the streets and a constitutional impasse.” Nice country you’ve got here, in other words, shame what’ll happen to it if you don’t vote the way we want.

The Claremont Institute’s American Mind website responded with an article by Michael Anton called “The Coming Coup?” with speculations you can guess from the title. The Anton piece went viral. This was Emily’s example of the sort of disinformation that has put the First Amendment in question.

Now, all this has the aspect of a Thanksgiving Dinner argument for me. Emily is my beloved cousin, while one important editor at The American Mind is my likewise beloved son Spencer, who promoted the Anton piece heavily on the Mind’s podcast.

For myself, in all honesty, I found the Brooks WaPo article despicable, but I also found Anton’s piece a tad overwrought. So what? This is America. The people here are nuts. For me, the big difference between Spencer’s gang and Emily’s is that Spencer wants to argue that Emily is wrong. Emily wants to suggest that Spencer has no right to speak at all.

“Scholars argue something that may seem unsettling to Americans: that perhaps our way of thinking about free speech is not the best way,” she writes. “At the very least, we should understand that it isn’t the only way. Other democracies, in Europe and elsewhere, have taken a different approach. Despite more regulations on speech, these countries remain democratic… Here in the United States, meanwhile, we’re drowning in lies.”

Obviously, we do understand our way is not the only way. Rather, we are the only country ever to have wrested this much personal freedom from its elites. If we lose those spectacular freedoms, they will not return to the face of the earth any time soon.

But the Times article is only one example. The influential D.C. think tank the German Marshall Fund has just published a report decrying “Deceptive Outlets” on Facebook. The worst threats? You guessed it: Fox, Breitbart, and the most honest folks I know, The Daily Wire.

The Left is determined to eat away at the First Amendment culture that gives the words of the Constitution life. And they’re making inroads. Also this week, Amazon Prime refused to distribute a documentary by Hoover Institute scholar Shelby Steele, one of the best writers on race in the country. The documentary, called “What Killed Michael Brown,” exposes the racial fairy tale about Brown’s death that led to the 2014 riots in Ferguson, Missouri. This, according to Amazon, must not be seen on their powerful site.

And they think Donald Trump is a danger to the Constitution!