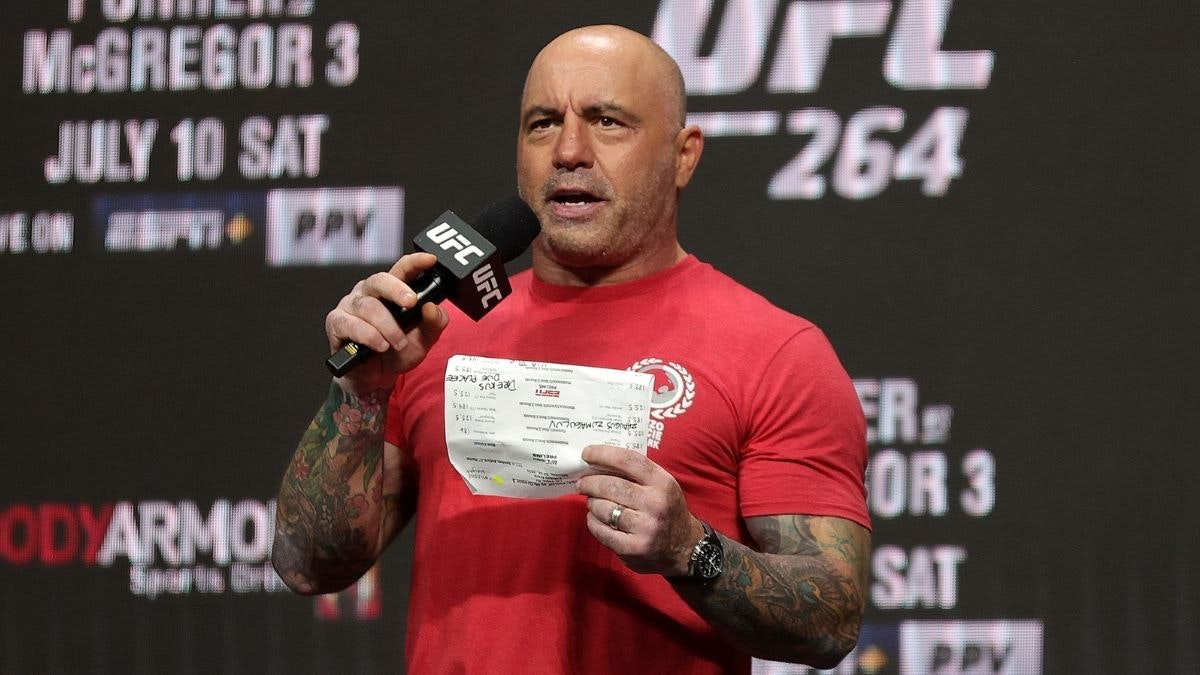 Joe Rogan, comedian and podcast host under fire from the Left in recent months for previous comments and jokes regarding race and COVID-19, will not be a part of the broadcasting team covering Saturday night’s Ultimate Fighting Championship (UFC) title fight between Israel Adesanya vs. Robert Whittaker. As recently as Wednesday, Rogan was scheduled to cover the fight as a color commentator, but now is unavailable due to a “scheduling conflict.”

MMAFighting.com reported that UFC, founded by Dana White, told the online outlet “that Rogan had a ‘scheduling conflict’ for UFC 271 and is scheduled to work commentary for UFC 272.” It is unclear what that conflict may be.

Earlier on Friday, The Daily Wire reported that UFC star Adesanya, who is black, took time out of his press conference to defend Rogan. Rogan recently apologized for his use of the n-word on his podcast “The Joe Rogan Experience,” but many have continued to call for Spotify, the platform which hosts his show, to remove the entertainer from their line-up due to “racism.” Adesanya flatly rejected that proposal and praised Rogan’s character:

“Look, there’s a lot of c***s in this game,” he told the reporter. “There are a lot of snakes in this game. I’ve been in this fight game since 2008. Joe Rogan is one of the nicest, coolest, humble motherf***ers I’ve had the pleasure of working with. Understand that.”

“F*** the noise,” Adesanya added. “You know what they’re trying to do. You can’t control the man. He’s got the biggest platform in the world right now. That’s my n**** Joe Rogan.”

Pressed about what Rogan should do to block out the “noise,” the fighter said, “Just keep doing you, Joe. Have some mushrooms. Keep doing you.”

While it is unclear which outlet or person specifically the MMA star was referencing when using the term “snakes,” media outlets like CNN have repeatedly dedicated airtime to discussing how dangerous Rogan is for past guests who contradict the medical establishment on COVID-19 prevention and vaccination, in addition to his politically incorrect commentary. In response to CNN, Rogan issued advice point blank on his latest episode of his podcast, as noted by The Daily Wire:

“My thoughts for CNN, my advice to them — I don’t hate CNN. I used to go to them every day for the news before they started f***ing hating on me,” Rogan said.

“If you want to do better, just f***ing change your model. Change the way you do it,” he added.

“Stop this editorial perspective with guys like Brian Stelter and Don Lemon that nobody listens to. Nobody is chiming in saying, ‘Oh yeah, finally we get the voice of reason.’ Nobody thinks that,” Rogan said.

For now, Rogan will be replaced by Michael Bisping in the booth alongside Daniel Cormier and Jon Anik.

Stars like Jake Paul alleged that Disney, which owns ESPN, coordinated to have Rogan removed despite giving the founder of UFC different treatment. As of press time, there is no evidence backing Paul’s assertion.

“So ESPN and Disney pull Joe Rogan from the UFC broadcast but stand behind Dana White who calls reporters douche bags, says a female fighter looks like a male fighter in dress and heels, and claims brain damage is part of the gig?” Paul claimed via Twitter. “You pulled the wrong guy Mr. Chapek.”

So ESPN and Disney pull Joe Rogan from the UFC broadcast but stand behind Dana White who calls reporters douche bags, says a female fighter looks like a male fighter in dress and heels, and claims brain damage is part of the gig? You pulled the wrong guy Mr. Chapek