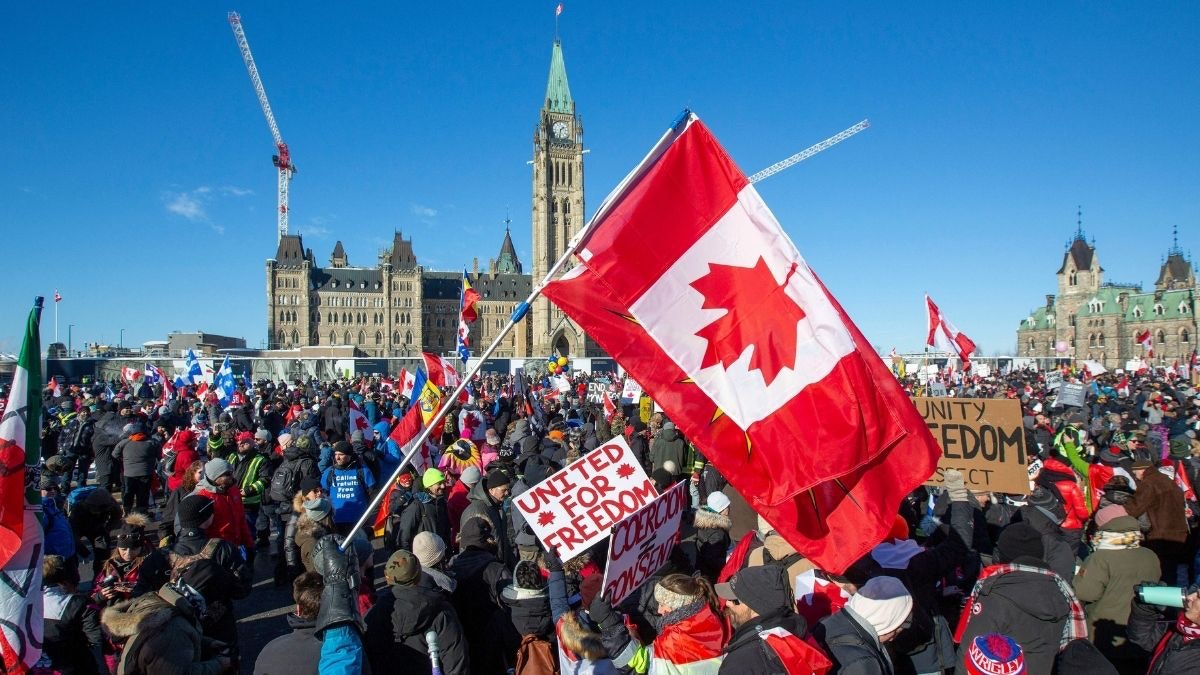 GoFundMe, the crowdsourcing fundraising platform used by a variety of political persuasion and causes, has released a statement saying that they will be shutting down the Canadian Freedom Convoy page that organizers had been using to raise more than 10 million Canadian dollars for individuals and truck drivers protesting Canada’s COVID-19 vaccine mandate.

According to the company, they now have “evidence” that the protest is no longer peaceful and is now an “occupation,” which violates their terms of services, although they did not specify what evidence they were referencing.

In late January, more than 50,000 truckers journeyed across Canada to the nation’s capitol in Ottawa, Ontario, to form a miles-long chain as a show against the Canadian government’s COVID-19 vaccine mandate, which required that all drivers be vaccinated or quarantine at home upon returning from going over the U.S. border. Quickly, the truckers received donations from around the world, and the group was able to establish themselves in Ottawa, assured that they would have access to the money that would keep them there until the mandates were lifted.

But, on Friday, The Daily Wire reported that GoFundMe had frozen the Freedom Convoy’s fundraising page. In response, the group employed the use of  The Justice Centre for Constitutional Freedoms, a Calgary-based non-profit law firm. The Justice Centre released a statement demanding GoFundMe re-grant access to the group’s funds:

“The truck convoy is a representation of Canadians’ frustrations with extreme government overreach, and unprecedented restrictions on their fundamental rights and freedoms,” Keith Wilson, lead counsel for the Justice Centre, said in a statement.

“Contrary to positions taken by government leaders, the Convoy represents ordinary, hard working Canadians – truckers, families, small business owners, Canadians who have lost jobs, income, missed holding the hand of a dying family member, been refused service in a store, or had their children miss months of school during lockdowns. The Convoy represents Canadians who are fed up with two weeks ‘to flatten the curve’ turning into two years of restrictions, mandates and decimation of democracy,” he added.

The Daily Wire also reported that the organizers of the group also spoke out, promising to continue fighting the mandates until they’re gone:

Tamara Lich, one of the organizers of the Freedom Convoy fundraising effort, also shared a statement, saying, “We are here out of love for our families, our communities and our nation. These past two years, the covid mandates have divided us.”

“This protest began because of the federal government’s restrictions on truckers’ freedoms. Our movement has grown in Canada and across the world because common people are tired of the mandates and restrictions in their own lives that now seem to be doing more harm than good. … We are therefore calling on all levels of government in Canada to end all covid mandates and restrictions. We will continue our protest until we see a clear plan for their elimination,” she added.

On Friday evening, GoFundMe denied their request and shut down the group altogether. Now, individuals who donated money can enter their email address via a form by February 19, 2022, to request a refund. The company’s statement can be seen below:

GoFundMe supports peaceful protests and we believe that was the intention of the Freedom Convoy 2022 fundraiser when it was first created.

We now have evidence from law enforcement that the previously peaceful demonstration has become an occupation, with police reports of violence and other unlawful activity.

To ensure GoFundMe remains a trusted platform, we work with local authorities to ensure we have a detailed, factual understanding of events taking place on the ground. Following a review of relevant facts and multiple discussions with local law enforcement and city officials, this fundraiser is now in violation of our Terms of Service (Term 8, which prohibits the promotion of violence and harassment) and has been removed from the platform.

Organizers provided a clear distribution plan for the initial $1M that was released earlier this week and confirmed funds would be used only for participants who traveled to Ottawa to participate in a peaceful protest. Given how this situation has evolved, no further funds will be directly distributed to the Freedom Convoy organizers — we will work with organizers to send all remaining funds to credible and established charities verified by GoFundMe.

All donors may submit a request for a full refund until February 19th, 2022 using this dedicated refund form.