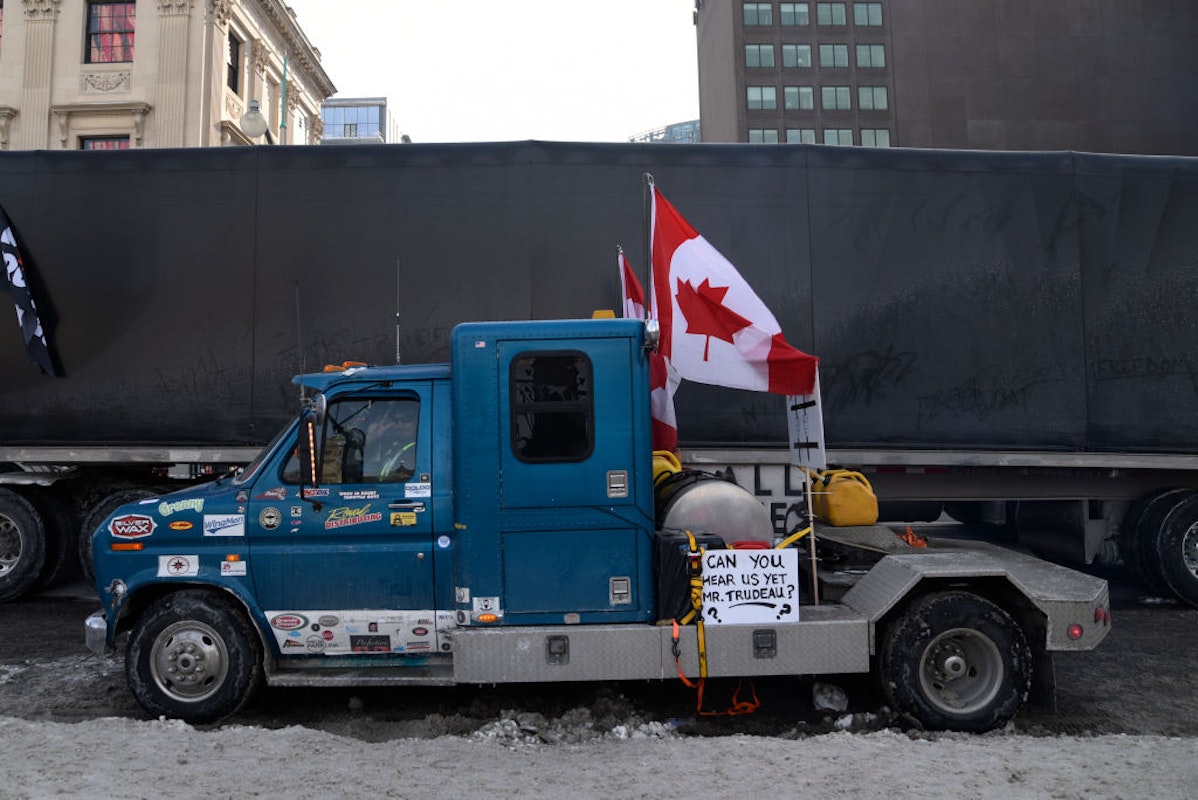 Truckers and other protesters continued to gather in Canada’s national capital for a fifth day of protest on Tuesday, with many gathering on Parliament Hill demanding that the Canadian government end vaccine mandates.

One Ottawa resident, Michael Bergen, waved both American and Canadian flags telling the Ottawa Citizen that he would not leave until Prime Minister Justin Trudeau heard his concerns.

“I’m here until the end,” Bergen stated. “I’m here until Justin Trudeau listens. We need some compromise. It’s his turn to listen to people he may not agree with.”

He explained to the outlet that he was waving an American flag to show his “love right back to them” because of the mandate’s cross-borders impact.

“The mandates don’t just affect Canada, they affect the United States as well so I’m showing my support for them, too,” he noted. “I’m showing my love right back to them.”

Another protester, Dan Scott, gave food away to those in attendance at the protest.

“I’m here for freedom of choice. People can get the vaccine or not,” he said. “I’ve been laid off since November and it just means a lot for me to be here.”

On Tuesday, Ontario Premier Doug Ford said that it was time for the “Freedom Convoy” to leave the city and “let the people of Ottawa get back to their lives.”

Yet many protesters still seemed determined to stay on and express their opinions.

Ottawa Paramedic Service chief Pierre Poirier said that “emergency lanes have been maintained which has allowed us to provide an uninterrupted service downtown and throughout the city.”

Last week, a convoy of thousands of trucks trekked across Canada headed to the capital. Organizers of the convoy have raised millions of dollars.

“We are a peaceful country that has helped protect nations across the globe from tyrannical governments who oppressed their people, and now it seems it is happening here. We are taking our fight to the doorsteps of our Federal Government and demanding that they cease all mandates against its people,” organizers explained in the GoFundMe for the demonstrations that they set up.

Some of the protesters, who are vaccinated, support the demonstrations because they don’t think that the government’s mandate is the right approach. Others cite people who have lost their jobs because of the mandates.

He said, “The amount of people who are unemployed because it’s their personal choice whether they want to be vaccinated or not, it’s not fair, just totally unfair.”