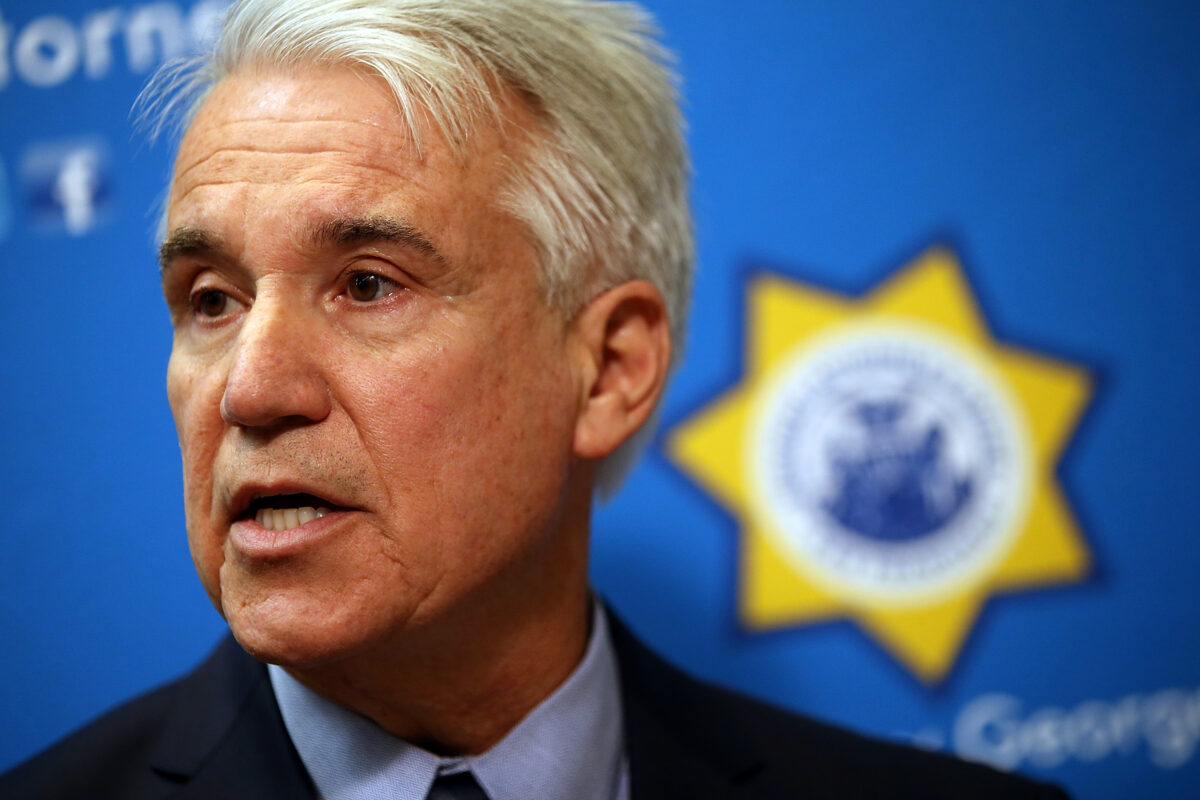 George Gascón is often referred to as the “Godfather of progressive prosecutors.” While serving as San Francisco’s District Attorney, he won the support of several liberal financiers, including mega-donor George Soros and several deep-pocketed philanthropists from the Bay Area. Now, they are backing his current campaign to take over the nation’s largest prosecutor’s office in Los Angeles County, home to more than 10 million people. Gascón claims that his strategy strives to find the proper balance between reducing violent crime and increasing public safety “without overincarcerating.” He has promised not to prosecute some offenses to the fullest extent allowed if elected on November 3, but Gascón’s critics equate that vow to a refusal to enforce laws mandated by both constitutional and statutory authority.

The countywide election, featuring two Democrats, is a priority for the national anti-incarceration movement, given that the L.A. County Sheriff’s Department operates the largest jail system in the United States.

We founded #BlackLivesMatter to stop the violence inflicted on our communities — but it is clear that politicians like #JackieLacey are not doing their part to help liberate us. Watch & share our new ad & help us defeat Lacey: https://t.co/b6rSKkeB3Z #JackieLaceyMustGo

— fund the us postal service – defund the police (@OsopePatrisse) October 6, 2020

The New York Times has called the contest “one of the most consequential races in the country.”

Last October, Gascón said he had “become increasingly more uneasy seeing the backwardness of the criminal justice system in L.A.,” then announced he would challenge Lacey the following week. Gascón said that his “goal” is to “offramp as many people as we can from the system” by creating alternatives to incarceration, diverting individuals “to other avenues of intervention whenever we can.”

“I believe that even short periods of incarceration are harmful in many ways,” Gascón said.

He supports redirecting money away from the Sheriff’s Department to social services, such as mental health treatment, substance abuse programs, and youth development.  Gascón’s chief spokesman described the philosophical differences with D.A. Lacey as “seeking punishment versus seeking results.”

At last week’s debate, @LADAOffice made it clear that she supports the death penalty, gang enhancements and her contributions from police unions.

L.A. deserves a DA who will hold police accountable and end mass incarceration. Vote for @GeorgeGascon.https://t.co/hu44EjIaLV

“If mass incarceration made us safer LA would be the safest place on earth, but it’s not,” said Max Szabo, who also worked for Gascón in the San Francisco DA office. “The practice also has huge implications for taxpayers.”

Here are five sentencing changes Gascón said he would implement if elected as the top law enforcement official in L.A.

1. Gascón would not seek the death penalty.

“I oppose using the death penalty under any circumstance,” Gascón has said. “If elected, however, we will go further, and I will not seek an execution date for any person already on death row.”

“I will work collaboratively with various stakeholders to get as many of the 229 people currently on death row from Los Angeles County resentenced to a sentence other than death,” he said.

The #DeathPenalty is broken, wastes a massive amount of taxpayer $$$ & creates an unnecessary risk that the state will put an innocent person to death. Honored to join victims, exonerees & advocates to announce a plan to resentence LA’s 229 people on death row. #GascónForLADA pic.twitter.com/62SL9WokFf

The candidates recently sparred over the issue during a debate.

“Until the voters tell me, ‘We don’t want this penalty anymore,’ we’re going to continue to seek it in some cases,” Lacey said. According to Lacey, her office only pursues capital punishment in “the most heinous and egregious” circumstances, with the last execution in California occurring on January 17, 2006.

Democratic Governor Gavin Newsom signed an executive order last year, suspending the death penalty during his administration. Only voters can repeal the law, which is part of the state constitution.

2. Gascón said he would not enforce some mandatory minimum sentences, such as California’s ‘Three-Strikes Law.’

Gascón said he would not be seeking mandatory minimum sentences permitted by California’s controversial ‘Three Strikes Sentencing Initiative.’ Voters overwhelmingly approved the measure in 1994 to increase prison time for repeat offenders. Its passage amended the state’s constitution, requiring a prison term of at least 25 years to life for defendants convicted of their third felony with two or more prior strikes. Gascón was part of an effort to soften the law in 2012, revising the mandatory minimum sentence requirements to apply only to individuals whose third felony is serious or violent.

As DA of San Francisco, @GeorgeGascon led fights to reform the Three Strikes Law & get people convicted of nonviolent offenses greater opportunities to get their lives back on track. I know he’ll work every day as DA of LA County to demand accountability from our justice system.

Gascón said prosecutors in his office would be required to obtain approval before pursuing mandatory minimum sentences for some crimes.

“I don’t believe that necessarily having the type of sentencing schemes that we have, where we’re sending people to prison 40-50 years or longer periods of time, has any connection to public safety,” Gascón told The Appeal.

He referenced other countries around the world with punishments “usually around 20 years” for serious offenses.

“After 20 years, it’s a year-by-year evaluation of psychological and dangerousness assessment,” Gascón continued. “I think that we need to start moving in that direction. One of the things that I did in San Francisco was that we looked hard at any sentence over 20 years.”

“If I were to be elected DA in LA, I would probably lower that threshold to 15 years, where we have to have a strong executive review of any commitments that will go much longer. That’s not to say that it would never happen, but it’s not automatic.”

3. Gascón said he would not pursue gang sentencing enhancements.

If elected, Gascón said he would no longer seek gang enhancements, which can lengthen a defendant’s prison sentence if a jury finds the crime benefited a gang. Such enhancements have been “corrupted,” he said, citing the alleged falsification by six officers from the LAPD of field interview cards that erroneously labeled dozens of people as gang members and associates.

Lacey said she would continue pursuing the enhancements, emphasizing that a defendant’s association with a gang is proven not by the field interview card but through testimony and other evidence brought before a jury.

Offenses perceived as small gang crimes can quickly escalate in L.A. For example, gang graffiti that could be marginalized as vandalism often creates a larger zone of danger within the subculture, sometimes leading to violence and murder.

“We need to get rid of all gang injunctions. Injunctions treats an entire neighborhood like criminals…. gang enhancements and CalGang needs to go away…we need to see kids as kids.”

Gascón previously charged suspects with gang enhancements as San Francisco D.A. but says his views have since evolved. He now considers the punishment “the product of discriminatory police work.”

4. Gascón said he would not transfer juveniles to adult court.

In July, Gascón released his plan to reform the youth justice system.

“I will end the ineffective practice of sending youth to the adult court system to be sentenced to prison,” he pledged. “Adult prisons are no place for youth as they are bereft of age appropriate treatment, education, or any other rehabilitative services.”

Gascón cited statistics indicating juveniles sentenced as adults are more likely to attempt suicide and are at the highest risk of rape while incarcerated.

Los Angeles has the largest juvenile justice system in the United States because @LADAOffice continues to ignore the science of youth brain development.

According to Eric Siddall, Vice President of the L.A. Association of Deputy District Attorneys, transferring youth to adult courts is a rare but necessary practice. The prosecutors’ union has endorsed D.A. Lacey.

“Consider a juvenile who committed multiple brutal murders,” Siddall said. “In Gascón’s new world, this murder will remain under the juvenile court’s jurisdiction, even if the court does not believe that the juvenile system is suited to deal with him.”

“The consequence of refusing to transfer any juvenile ever is that a 16- or 17-year-old who commits murder will be under the jurisdiction of the juvenile system,” he continued.