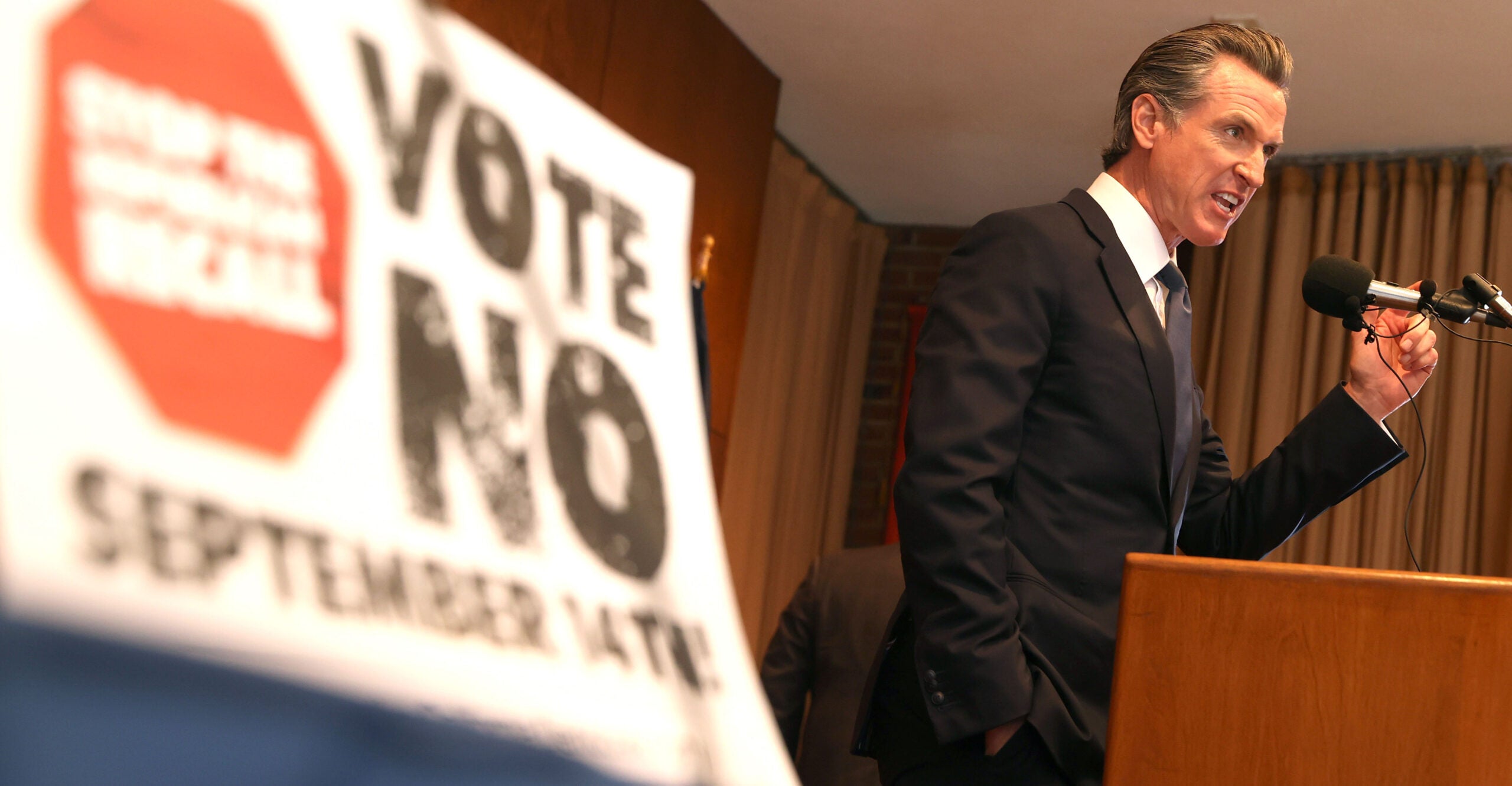 California Gov. Gavin Newsom on Tuesday became only the second governor in American history to survive a recall, in an election that President Joe Biden and other visiting national Democrats helped pull out for him in a big way.

Newsom, the 40th governor of the nation’s most populous state, easily dodged the same fate as fellow California Democrat Gray Davis, who was recalled and removed in 2003.

About 47 minutes after polls closed at 8 p.m. in California, The Associated Press projected the race for Newsom with early returns showing that 67% voted “no” to recalling the governor and 33% voted “yes,” with just under 60% of all precincts reporting.

Exit polls showed voters who opposed recall were most concerned about COVID-19.

“We said yes to science. We said yes to vaccines,” an exhausted-looking and somewhat emotional Newsom said in a relatively brief appearance at Democratic headquarters in Sacramento just before 9 p.m. local time.

By a wide margin, conservative talk radio host and columnist Larry Elder garnered the most votes among 46 candidates to replace Newsom. With 61% of the vote in shortly after 9 p.m. local time, Elder was the choice of 43.6% to replace Newsom.

Newsom raised more than $70 million to fight the recall, mostly in July and August, the Times reported, while Elder has spent about $600,000. Under the recall law, Newsom was not bound by the same campaign finance restrictions as were candidates to replace him.

In a long and freewheeling concession speech delivered in Costa Mesa beginning just after 10 p.m. PDT, Elder told supporters: “Let’s be gracious in defeat and, by the way, we may have lost the battle, but we are going to win the war.”

Elder went on to say that the recall campaign forced the Newsom administration to pay attention to the state’s urgent problems:

In making their choices, California voters first responded to the question: “Shall Gavin Newsom be recalled as governor?” Voters then answered a second question on who should replace Newsom if he is recalled and removed.

As recently as August, the contest in California seemed tight, with a real possibility of a victory for Elder. But Newsom’s campaign galvanized the state’s Democrats by making the election about Elder’s conservatism and comments he had made over two decades on talk radio.

Mail-in ballots were an option for all California voters, an extension of last year’s policy. Supporters of recalling Newsom were particularly concerned about the state’s making it possible to go online and download mail-in ballots.

The statewide system, called Remote Accessible Vote-By-Mail, allows voters to fill out ballots online and then print them. From there, voters may mail the ballots or put them in a drop box.

At a campaign rally Monday, Biden referred to Elder as “a clone of Donald Trump,” knowing that the 45th president is unpopular in California.

“We may have defeated Trump, but Trumpism is not dead in this country,” Newsom said Tuesday night, sounding a fiercely partisan note. “The big lie, the Jan. 6 insurrection, all the voting suppression efforts that are happening all across this country, what’s happening, the assault on fundamental rights, constitutionally protected rights of women and girls.”

Republicans make up only 24% of the state’s registered voters, on a par with independents, at 23%, while Democrats make up almost half at 47%.

During the rally with Biden on Monday, Newsom—part of a wealthy San Francisco family—called for voters to back him because “Racial justice is on the ballot tomorrow night.”

Elder, who is black, did not grow up wealthy. However, he not only became a lawyer but a nationally syndicated radio host and columnist.

Left-leaning media outlets in California in effect assisted the Newsom campaign by piling on Elder, raising unproven allegations and, in the case of The Los Angeles Times, running a column calling the Republican candidate “the black face of white supremacy.”

Last week, a white woman wearing a gorilla mask threw an egg at Elder and punched aides during a campaign stop.

Trump did not endorse Elder, 69, nor did the former president campaign for any candidate to replace Newsom, 53. But the governor made Trump the main issue as he sought to woo independents as well as blacks, Hispanics, and other Democrat constituencies back to his side.

By contrast, Elder ran an issue-oriented campaign focusing on the impact of lengthy COVID-19 shutdowns on the state’s economy and schools, as well as homelessness, crime, housing prices, and the state’s management of wildfires.

In the closing days of the recall effort, Elder repeatedly noted that Biden, Vice President Kamala Harris, former President Barack Obama, and other celebrity Newsom supporters never claimed that he was “doing a good job” on these and other fronts.

Newsom was in the most trouble when the recall referendum was focused on his performance as governor and no clear Republican candidate had emerged.

After Elder—driven largely by name recognition—emerged as the leading GOP candidate, Democrats were able to make it a de facto Newsom vs. Elder race.

In the 2003 recall, voters chose to oust Davis from office and elect Republican candidate and movie star Arnold Schwarzenegger.

Before being elected governor in 2018, Newsom served two terms as lieutenant governor under Jerry Brown and, before that, seven years as San Francisco mayor.

The petition to recall Newsom was launched in February 2020—little more than a year after he assumed the governorship and early into the shutdown of state businesses over COVID-19.

The petition stated, in part: “People in this state suffer the highest taxes in the nation, the highest homelessness rates, and the lowest quality of life as a result.”

The recall campaign saw a dramatic uptick after Newsom was seen dining indoors and unmasked with a group of lobbyists on Nov. 6 at the French Laundry, a pricey restaurant in Napa Valley, in apparent violation of his government’s own COVID-19 guidelines.

At first, Newsom said he dined with the lobbyists outdoors; when photos of him at the indoor dinner surfaced, the governor apologized.

In April, the California Secretary of State’s Office certified the recall to appear on the ballot after petitions gained 2.1 million signatures, surpassing the required 12% of those who voted in the 2018 gubernatorial race.

Elder joined the race in late July as the race tightened to neck and neck between “yes” on recall and “no” on recall.

Elder soon surged to the head of the Republican pack, and Democrats sought to make both the commentator and Trump the faces of the recall.

At least some polls at the time showed “yes” on recall winning. Others showed a dead heat.

At that point, national Democrats mobilized behind saving Newsom. In the last month, Harris—a former California senator and state attorney general—returned to campaign with Newsom.

Most of the $70 million Newsom raised came in July and August after the race tightened. The biggest contributions from donors hoping to save Newsom included $3 million from Netflix CEO Reed Hastings; $500,000 from liberal billionaire George Soros; $500,000 from Hollywood producer Jeffrey Katzenberg; and $750,000 from Priscilla Chan, wife of Facebook founder Mark Zuckerberg.

Voter turnout on Election Day reportedly was high in some areas despite a heavy mail-in vote. About 9 million votes already cast before Tuesday likely would make up the bulk of all ballots, The New York Times reported.

KTLA reported Tuesday that several voters in the San Fernando Valley from both parties said they attempted to drop off ballots or vote in person and were told they already had voted. These voters were able to cast provisional ballots.

The same TV station reported that the problem had been going on since Saturday, with voters concerned they were being prevented from casting their ballots.

California first adopted a recall system for state officials in 1911 under Gov. Hiram Johnson, a Republican. This was during the nation’s progressive era, when other states also adopted a form of recall election.

Currently, 20 states allow the recall of state officials. That includes Virginia, where there has been some debate as to whether the commonwealth may recall governors.

Though recall efforts are somewhat routine, Tuesday’s election in California marked only the fourth time a recall of a governor garnered enough signatures to make it to the ballot.

The first gubernatorial recall election occurred in 1921, in which North Dakota Gov. Lynn Frazier, a Republican, got the boot.  Another Republican, Ragnvald Nestos, replaced Frazier as governor.

Although many state legislators and mayors have been recalled, it wasn’t until 2003 that another governor faced recall, when California voters replaced Davis with Schwarzenegger.

In 2012, Wisconsin Gov. Scott Walker, a Republican, became the first governor to survive a recall.

Ken McIntyre contributed to this report.

Have an opinion about this article? To sound off, please email [email protected] and we’ll consider publishing your edited remarks in our regular “We Hear You” feature. Remember to include the URL or headline of the article plus your name and town and/or state.

(34022)
$69.99 scription% (as of January 19, 2022 13:31 GMT -06:00 - More infoProduct prices and availability are accurate as of the date/time indicated and are subject to change. Any price and availability information displayed on [relevant Amazon Site(s), as applicable] at the time of purchase will apply to the purchase of this product.)

(6)
$37.99 scription% (as of January 19, 2022 13:31 GMT -06:00 - More infoProduct prices and availability are accurate as of the date/time indicated and are subject to change. Any price and availability information displayed on [relevant Amazon Site(s), as applicable] at the time of purchase will apply to the purchase of this product.)

(945)
$49.99 scription% (as of January 19, 2022 13:31 GMT -06:00 - More infoProduct prices and availability are accurate as of the date/time indicated and are subject to change. Any price and availability information displayed on [relevant Amazon Site(s), as applicable] at the time of purchase will apply to the purchase of this product.)

(808)
$8.48 scription% (as of January 19, 2022 13:31 GMT -06:00 - More infoProduct prices and availability are accurate as of the date/time indicated and are subject to change. Any price and availability information displayed on [relevant Amazon Site(s), as applicable] at the time of purchase will apply to the purchase of this product.)

Atlas of the Heart: Mapping Meaningful Connection and the Language of Human Experience

(828)
$24.15 scription% (as of January 19, 2022 13:31 GMT -06:00 - More infoProduct prices and availability are accurate as of the date/time indicated and are subject to change. Any price and availability information displayed on [relevant Amazon Site(s), as applicable] at the time of purchase will apply to the purchase of this product.)

$10.99 scription% (as of January 19, 2022 13:31 GMT -06:00 - More infoProduct prices and availability are accurate as of the date/time indicated and are subject to change. Any price and availability information displayed on [relevant Amazon Site(s), as applicable] at the time of purchase will apply to the purchase of this product.)

$28.98 scription% (as of January 19, 2022 13:31 GMT -06:00 - More infoProduct prices and availability are accurate as of the date/time indicated and are subject to change. Any price and availability information displayed on [relevant Amazon Site(s), as applicable] at the time of purchase will apply to the purchase of this product.)

(188)
$50.99 scription% (as of January 19, 2022 13:31 GMT -06:00 - More infoProduct prices and availability are accurate as of the date/time indicated and are subject to change. Any price and availability information displayed on [relevant Amazon Site(s), as applicable] at the time of purchase will apply to the purchase of this product.)