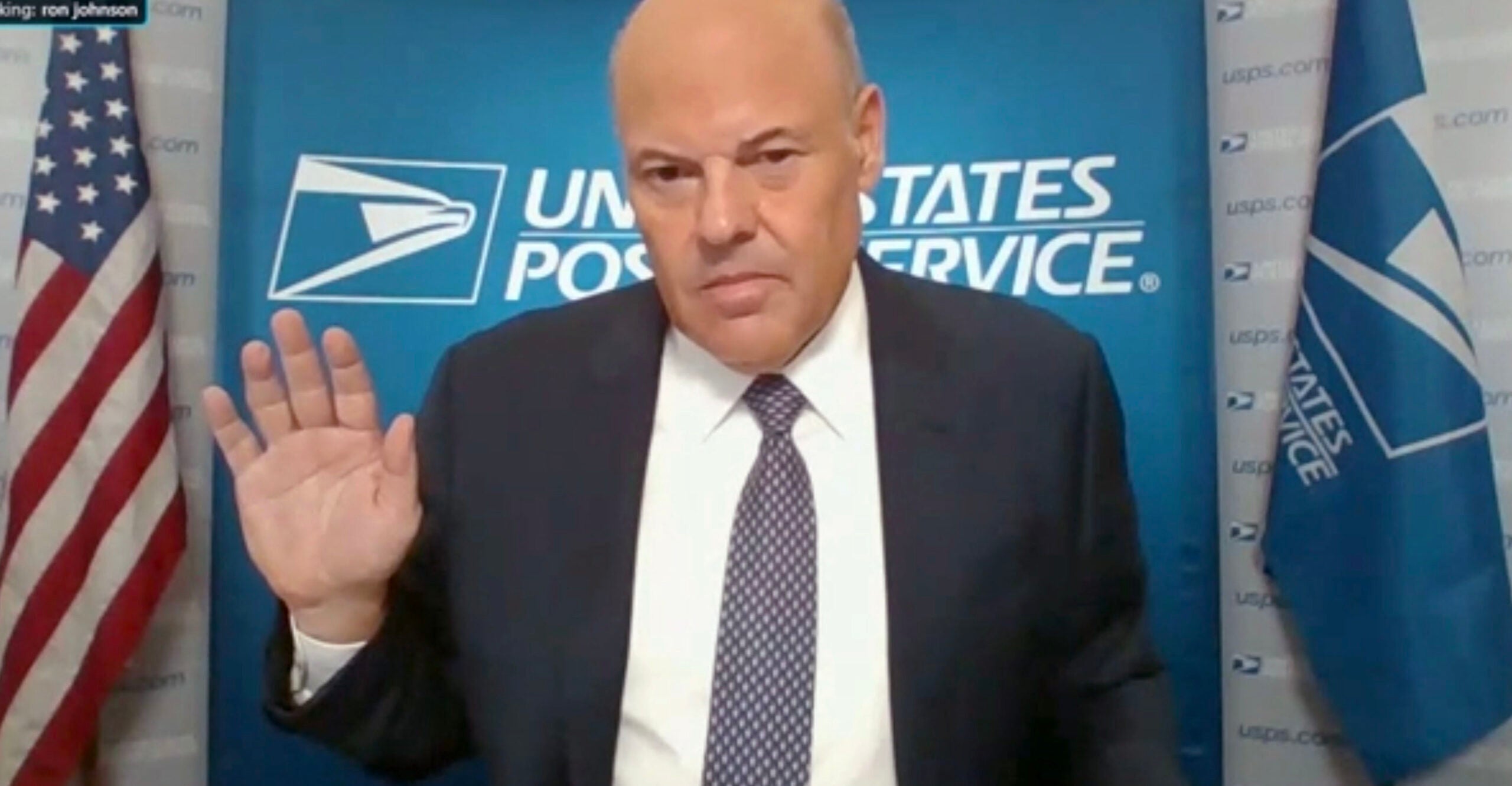 Postmaster General Louis DeJoy testified Monday before a House committee to address Democrats’ recent theories regarding actions taken by the U.S. Postal Service weeks and months before the November election.

Voting by mail, either through absentee ballots or by universal mail-in ballots, is expected to be high this year because of the COVID-19 pandemic.

As previously reported, however, many of the Postal Service’s actions were routine measures and not aimed at ballots.

Here’s a look at four big moments from DeJoy’s testimony to the House Oversight and Reform Committee.

1. What the Postal Service Isn’t Doing

DeJoy, former CEO of a supply chain transportation company, said he didn’t direct the controversial cost-cutting actions that recently occurred at post offices across the country, but he put an end to it.

“There are many inaccuracies about my actions that I wish to again correct. First, I did not direct the removal of blue collection boxes, or the removal of mail processing equipment,” DeJoy told the committee.

“I did, however, suspend these practices to remove any misperception about our commitment to delivering the nation’s election mail. Any further assertions by the media or by elected officials is furthering a false narrative to the American people.”

DeJoy, in the postmaster’s general job since June 15, said the U.S. Postal Service will be capable of handling ballot delivery for Election Day, as absentee ballots and other mail-in ballots are expected to be a major method of voting in the year of the COVID-19 pandemic.

DeJoy said the USPS recommends voters request a ballot at least 15 days before the Nov. 3 election, to ensure that they have enough time to receive the ballot, complete it, and mail it back to the local elections office. The return ballot should be placed in the mail at least seven days prior to the election, he said:

Despite some assertions to the contrary, this is the same message that we have made in previous years and have been reiterating all year, and has nothing to do with recent operational initiatives or concerns about delayed mail. To be clear, these recommendations are designed to help ensure that ballots will be delivered and counted, and should in no way be misconstrued to imply that we lack confidence in our ability to deliver those ballots.

“We have intensified our efforts to fulfill our role in the electoral process,” he said.

DeJoy referred to recent findings by the Postal Service’s inspector general that it spent $1.1 billion in mail processing overtime, $280 million in late and extra transportation, and $2.9 billion in delivery overtime in fiscal year 2019.

“While we did not fully agree with all aspects of OIG’s report, we did not dispute the fundamental conclusion that we need to redouble our efforts to focus on our plans to improve operational efficiency and to further control overtime expenditures,” DeJoy said, referring to the Office of the Inspector General.

2. Tlaib: ‘You Can Either Resign or Divest’

Rep. Rashida Tlaib, D-Mich., went after the postmaster general for his past business dealings with Amazon. However, DeJoy said he did not have any financial interest in the giant online marketplace.

The member of the so-called Squad, a group of progressive Democrats who are female freshmen in the House, said that about 40% of Amazon’s shipments go through the Postal Service. Since DeJoy had an interest in both, this posed a conflict, Tlaib said.

“This appears to be a classic example of conflict of interest and insider trading. Yes or no, will you commit right now to divest any and all financial interests in Amazon to avoid illegal insider trading?”

DeJoy responded: “That was a lot of time on an issue that doesn’t matter. I don’t own any Amazon stock.”

Tlaib shot back: “You have financial interest. You can call it whatever you want.”

DeJoy: “I don’t own anything with Amazon.”

Tlaib: “Your financial interest in Amazon will continue to be problematic, illegal, and a conflict of interest. Regarding this matter, you have a simple choice, Mr. DeJoy. You can either resign or divest that interest.”

The Michigan Democrat didn’t spell out what conflict or financial interest she was talking about.

Tlaib also accused DeJoy of “dismantling the Postal Service,” and appeared to warn that he could end up in jail.

“This impeached president, Mr. DeJoy, you have to realize, has a tendency of employing crooks who end up in a lot of trouble for their illegal activities,” she said, adding: “You are not in good company right now, so do the right thing and resign.”

After heated rhetoric such as this from numerous Democrats, Rep. Jim Jordan, R-Ohio, asked the postmaster general: “Why are these guys out to get you? What is it?”

DeJoy diplomatically responded: “I don’t—they have their own concerns. I’m assuming they’re legitimate with them.”

Jordan said: “You assume they’re legitimate. Why are they out to get you?”

The Ohio Republican then said he thought it likely Democrats were not sincere and were looking to use language that might create panic before the 2020 election.

“I mean, Mr. DeJoy, they’ve had people protesting at your house. They’ve been doing it for weeks, 90-some of these people have already called for you to resign,” Jordan said of House Democrats.

Jordan referred to a bill that the House passed over the weekend to provide a $25 billion bailout of the Postal Service. It would require that the Postal Service prioritize election mail as “first class” to expedite delivery of mail-in ballots.

The House’s Democratic majority did not address COVID-19 relief legislation after House Speaker Nancy Pelosi, D-Calif., called the chamber back into session.

“They passed a bill before they even talked to you, before they even had a hearing,” Jordan said. “They are not interested in any bipartisan solution; as evidence, the chairwoman wouldn’t even contact the White House chief of staff [Mark Meadows], who had a bill that he worked on with the previous [committee] chairman, the late Elijah Cummings, a bipartisan bill to address concerns at the Post Office.”

Jordan asked again:  “So, I’m asking you, why are they after you? First of all, you were appointed by the [Postal Service] Board of Governors, right?”

DeJoy answered, “I was unanimously appointed by the Board of Governors.”

Jordan noted: “Unanimous vote. Bipartisan. Not all Republicans. Democrats thought you were the right guy for the job, right?”

Then Jordan asked again: “So why are they out to get you?

DeJoy replied: “I have no idea. I do have a lot of support out there amongst the employees and people in America. I receive it every day.”

Possibly the biggest bomb thrower during the hearing was Rep. Jim Cooper, D-Tenn., although he did so in a more even tone.

“How dare you disenfranchise so many voters when you told a Senate committee just last week that you had a sacred duty to protect election mail,” Cooper said. “You know that it’s a felony for a Postal Service officer or employee to delay delivery of mail. A postal employee can be fined and imprisoned for up to five years for delaying the mail. But somehow you can delay all the mail and get away with it.”

DeJoy told Cooper that he was in “full compliance with all the ethics requirements,” and then the Tennessee Democrat started bringing up new matter without citing evidence.

Cooper noted that DeJoy was a “megadonor for the Trump campaign.” He then brought up DeJoy’s time as CEO of the North Carolina-based New Breed Logistics, a transportation and logistics company.

“Did you pay back several of your top executives for contributing to Trump’s campaign by bonusing or rewarding them?” Cooper asked, suggesting an illegal act to subvert limits on campaign contributions.

DeJoy responded: “That’s an outrageous claim, sir, and I resent it.”

He then corrected the congressman, saying: “Actually, during the Trump campaign, I wasn’t even working at my company any more.”

Cooper apparently was caught off guard by the timeline, but responded: “Well, we want to make sure campaign contributions are legal.”

DeJoy: “I’m fully aware of legal campaign contributions and I resent the assertion, sir. What are you accusing me of?”

Cooper: “I’m asking a question. Do your mail delays fit Trump’s campaign goals of hurting the Post Office as stated in his tweets?”

This was a reference to the president’s tweets that have disparaged mail-in voting and, at times, the Postal Service.

Then, with apparent frustration, the postmaster general again brought up USPS problems that predated his 70 days as agency head.

“Mr. DeJoy, is your backup plan to be pardoned like Roger Stone?” Cooper said.

A murmur arose in the rather empty, socially distanced hearing room, as people saying, “Oooh.”

DeJoy, shaking his head and smiling, said: “I have no comment on that. It’s not worth it.”

(32503)
scription% (as of n/a - More infoProduct prices and availability are accurate as of the date/time indicated and are subject to change. Any price and availability information displayed on [relevant Amazon Site(s), as applicable] at the time of purchase will apply to the purchase of this product.)

(1389)
scription% (as of April 22, 2021 - More infoProduct prices and availability are accurate as of the date/time indicated and are subject to change. Any price and availability information displayed on [relevant Amazon Site(s), as applicable] at the time of purchase will apply to the purchase of this product.)

(29562)
scription% (as of n/a - More infoProduct prices and availability are accurate as of the date/time indicated and are subject to change. Any price and availability information displayed on [relevant Amazon Site(s), as applicable] at the time of purchase will apply to the purchase of this product.)

When You See Yourself

(781)
scription% (as of April 22, 2021 - More infoProduct prices and availability are accurate as of the date/time indicated and are subject to change. Any price and availability information displayed on [relevant Amazon Site(s), as applicable] at the time of purchase will apply to the purchase of this product.)

Amazon.ca Gift Card for Any Amount in Birthday Pop-Up Box

(405)
scription% (as of n/a - More infoProduct prices and availability are accurate as of the date/time indicated and are subject to change. Any price and availability information displayed on [relevant Amazon Site(s), as applicable] at the time of purchase will apply to the purchase of this product.)

(56)
scription% (as of April 22, 2021 - More infoProduct prices and availability are accurate as of the date/time indicated and are subject to change. Any price and availability information displayed on [relevant Amazon Site(s), as applicable] at the time of purchase will apply to the purchase of this product.)

(28840)
scription% (as of n/a - More infoProduct prices and availability are accurate as of the date/time indicated and are subject to change. Any price and availability information displayed on [relevant Amazon Site(s), as applicable] at the time of purchase will apply to the purchase of this product.)

scription% (as of April 22, 2021 - More infoProduct prices and availability are accurate as of the date/time indicated and are subject to change. Any price and availability information displayed on [relevant Amazon Site(s), as applicable] at the time of purchase will apply to the purchase of this product.)